Elizabeth Reimer, the author of this post, is a double major in Bible and Religion and Peace Justice & Conflict Studies.

On Sunday, we transitioned from Navajo to Hopi. We said goodbye to our gracious hosts at Black Mountain Mennonite Church and piled into the bus, van, and car for the hour and a half ride to the Hopi Peace Academic Center, where we will be staying for the next three weeks.

The first thing everyone noticed about our new accommodations were the beds. We have beds here! We’re staying in the volunteer housing, which features multiple working bathrooms, a laundry machine, and a wide assortment of board games. These new amenities were immediately put to use.

Our tour of campus, which took place later that day, was full of interesting facts about the school. Their industrial kitchen, for instance, was an exciting discovery. The campus currently houses a number of different groups, including the Hopi public library and a GED program. It also houses two cemeteries, which our host, Lance, was delighted to point out to us.

The next day, we learned even more about the Peace Academic Center from Kay, one of the volunteers. The center, which was formerly called the Hopi Mission School, had been created in the 1920s by Mennonites with the support of the Hopi tribe. Since then, it has served the surrounding communities faithfully. In fact, most Hopi leaders attended the Peace Academic Center as children. Lance proudly noted that every Hopi that has attended an Ivy League School first attended here.

Unfortunately, the center was forced to close a few years ago when the FBI discovered that the principal had been embezzling money. The controversy rocked the small school and forced its leaders to seriously consider their future serving the Hopi people. The school even offered to give the land back to the Hopi, who refused to take it. They saw the school as a valuable resource to the community and wanted it to continue to operate as before. With this encouragement, the school decided to reopen, now under the name “Peace Academic Center.”

Since their reopening in 2018 the center has been slowly working to build up trust in the community again. Their transition to functioning as more of a community center has helped facilitate those connections, but they remain committed to their core mission of education. Though COVID-19 hit the Hopi hard, it had the unintended effect of helping the center reach more kids through their Kindle program. This past year they had a total of 24 students, a big step in their journey to rebuild.

While here, we’ll be helping to create and maintain those connections further through a two-week summer camp focusing on reading and math skills. Though COVID-19 continues to pose challenges, we’re excited to help in whatever ways we can. 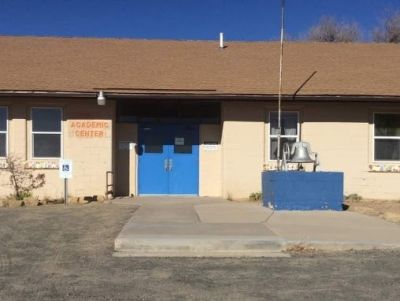 The front of the main building at the Peace Academic Center 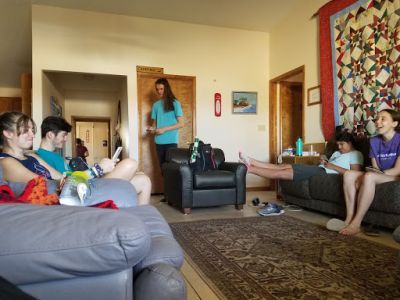 Members of the group hanging out in our new lounge