Jared Juarez Salgado is a sophomore at Goshen College with a major in biochemistry and a minor in Spanish.

During our stay in the Navajo reservation we had the opportunity to learn about Navajo customs and also practices. One day we learned how to make pottery with traditional customs such as a pinch technique and also a coil technique. Our instructor was Mary Trejo, a Goshen College Alumni of the class of 1996. As a child she learned how to work with clay while she took care of sheep with her aunt. As a child she used the soil she found while sheep herding and she would add water until she made clay. When it comes to pottery making she learned through watching and she was never formally taught. She would practice what she saw other people do and use their techniques. Later in her life she had the opportunity to attend Goshen College where she would take ceramics classes. She learned new techniques at Goshen College but also continued to use the techniques she learned as a child.

Regarding Mary’s pieces, she frequently depicts Navajo women. She wants to show their strength and also the care they take for their family. Mary also makes pots which medicine men would use to mix herbs for a ceremony or they would use it as a drum. She said they would place an animal hide on the top part of the pot and strike it like a drum.

Mary showed us different techniques for making pottery, specifically the pinch pot and coil technique. With the pinch pot technique all you need to do is make a ball of clay and make a hole on the top with your thumb. From there you begin making the hole larger by rotating the ball (clockwise) and also your thumb (counterclockwise) until you get the pot shape you want. For the coil technique, the clay is rolled out just like rolling out dough. The clay should be thin and cylindrical. From there you place more coils until you get a pot.

A little more about Mary is that she graduated from Goshen College in 1996 with a bachelor’s degree in education of K-12. She has been teaching at her local high school, Chinle highschool since 2006. Her first clan is the Bitterwater clan which is closely associated with bears, one of her children used to make ceramic pieces of bears. 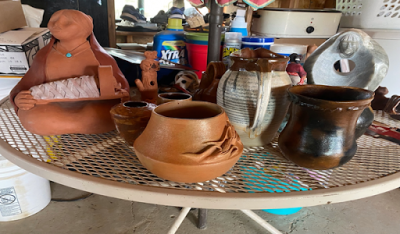 Pictures shows many of Mary’s pieces including one from her nephew’s pieces (in grey). One of her pieces shows a Navajo women holding a baby. 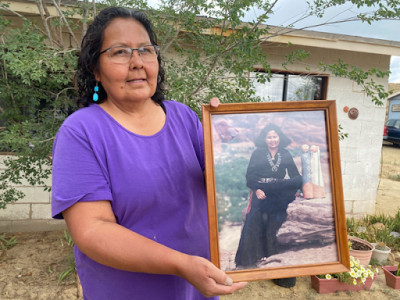 Picture shows Mary Trejo holding a picture of herself and one of her pieces that depicts twin sisters she made with the coil technique.