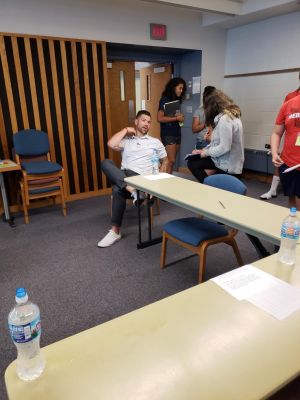 Write on Sports campers interviewed Braxston Cave and Trevor Robinson, past Notre Dame and NFL players, on Monday during a Goshen College visit. One common theme that emerged throughout the interviews was their love for football and their families. Both men had promising futures in their careers.

As both men entered College, academics was their top priority.  Cave and Robinson shared that they had 42 or more college offers and it was a difficult decision.  Both, chose Notre Dame University for their academics and their football careers. They both excelled in their college careers, which, led them both to sign with NFL teams.

The conversation then turned to why they retired.  One camper asked, “what made you decided to leave the NFL and work for Lippert Components?”  Robinson shared, that his twin boys were born early and very sick. They spent several months in the hospital, and he felt that it was best for his family to be there and help his wife. He felt it was an easy decision. Cave, also felt that as he was welcoming his daughter into the world, it would 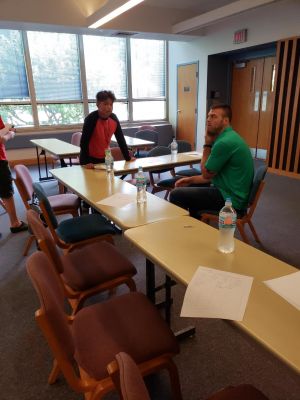 not be easy moving from state to state, and wanted something more permanent.

The conversation was engaging, which, gave the campers many possible angles for the spot stories. The athlete’s ended the interviews with answering a few questions from Vince Tuner. Turner did a fantastic job at engaging the students and sharing his career high as a sports writer. He highlighted his favorite moments with high school basketball and football games.

When one camper asked, what his favorite job was, he left the students with this. “My favorite job is the job that I am doing right now. It is the one that makes me.” He explained, that whatever you are doing in the moment should motivate you to do your best and be your best.

Turner has made a memorable impression on the Write on Sports Campers this year and we look forward to having him back.