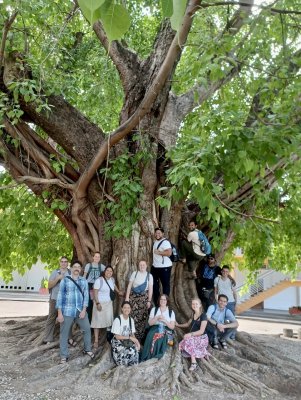 Wednesday after Swahili class we walked to unit house for our weekly meal and reflection/sharing time. Naomi and Ethan shared their Cultural Story Journals – both were moving stories exploring cultural competencies, similarities and differences we are noticing, and observations about ourselves.  Annika and Billy shared excellent responses to the readings for this week, which explored early human history and language groups from the period of about 20,000 years before the present.

After Swahili class on Thursday, students ate lunch on their own downtown and then walked to the National Museum of Tanzania to explore their display on human evolution – it is outstanding!  Students spent about an hour exploring the human story via a variety of placards and casts of original fossils. This story of Tanzania history spanned 6 mya to 200,000 years ago when Homo sapiens first appeared.

We also arranged for the Director of the Paleontological Division, Mr. Wilson Jalala, to give a lecture, which began under the tree in the courtyard. The rain eventually drove us inside, and our teacher decided to finish the lecture in the curators section of the museum! We stood within feet of some of the most important fossils in the world. Instead of telling us about the human evolutionary story, Mr. Jalala finished his lecture by introducing us to molds of these rarities with expert explanation of their unique traits and differences. (Ryan was on cloud nine!).