Mwalimu (‘Teacher’) Julius Nyerere was Tanzania’s first president after independence (1961). He propounded Ujamaa–a socialism grounded in the solidarity of extended African families.  He managed to unite the country not least by promoting Swahili as a national language, and Tanzania has avoided much of the ethnic violence that has plagued surrounding countries.  While Tanzania’s socialist experiment has had some missteps, we have witnessed widespread affection and respect for Mw. Nyerere. 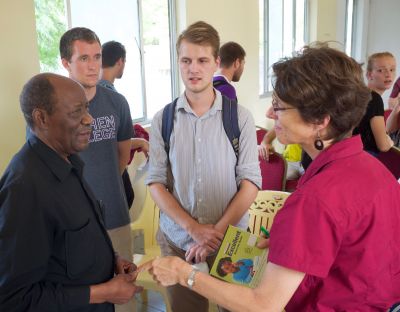 We were privileged to hear from Joseph Butiku, Nyerere’s chief of staff for many years.

Some of the other lectures this week dealt with the development challenges that Mw. Nyerere wrote about: eradicating disease, poverty, and ignorance.

Students packed quite light to come to Tanzania. It’s summer in this country just south of the equator, so we are all quite practically interested in finding out how Tanzanians deal with the heat. This has resulted in a number of trips to Kariakoo to shop for fabric–which comes in a fantastic array of colors and patterns.