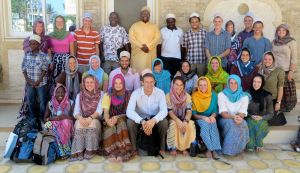 Today we were honored to have the opportunity to visit with the top Islamic leader in Dar es Salaam, Sheikh Alhaj Alhaad Musa.  We first visited Sheikh Musa in his office in Kariakoo and spent 30 minutes in conversation as the students were invited to ask questions about Islam.  The Sheikh welcomed us warmly and noted that most Americans and visitors do not take the time to visit a mosque or express interest in learning about Islam.

He noted that the three major religions – Judaism, Christianity, and Islam – all share the same father Ibrahim (Abraham) and reminded us that we corporately worship the same God.  He noted that all of humanity share the same parents – Adam and Eve – “therefore we are one”.  We felt genuinely and warmly received. The Sheikh in particular wanted to remind us that the tragedies related to terrorism around the world (including Sept. 11) are not representative of Islam in general, nor does Islam condone violence.

After we visited with the Sheikh we took bajajis (3 wheeled “taxis”) across town to visit a mosque in the Upanga district.  Here we met with Sheikh Issa O. Issa and we heard a similar message. The imam suggested there are fundamentalists in both Christianity and Islam who do not represent their religion’s truth. Aside from these fundamentalist views, we have much in common.

During our time here, students have consistently noted that “religion” is everywhere. The call to prayer sails across the ocean breeze 5 times a day and has become part of our consciousness.  The sunday evangelical sermons blare from church speakers and reverberate across town.  The Buddhists temples, the Indian mosques, the itinerant evangelical preachers on the sidewalk – all vie for people’s attention.

Sheikh Musa, Sheikh Issa, and Pastor John Wambura (of the Mennonite Church) have all been involved in a government appointed Interfaith Committee charged with promoting tolerance and celebrating this religious diversity.  It was refreshing to hear the Sheikhs’ call for peace and emphasis on celebrating the common goals embodied in each of these communities.

– Ryan for the team