Our third week focused on the religious context of Senegal, particularly on the role of Sufi Islam and the different brotherhoods. We had two lectures to start the week. On Monday we heard from Moïse Diémé, who spoke with us broadly about the history and influence of the three main religious traditions in Senegal including animism, Sufi Islam, and Christianity. On Tuesday, we heard from Gallo Dieng, who spoke with us about the different Islamic brotherhoods in Senegal.

On Thursday morning we traveled to the holy city of Touba. In Touba we toured the Great Mosque of the Mouride brotherhood. The Mouride brotherhood, founded in 1883 by Sheikh Amadou Bamba, is one of the four main Muslim Brotherhoods found in Senegal. Millions of Senegalese and international faith practitioners travel to Touba every year. After visiting the mosque, we toured the library that contains the prolific writings of Bamba, as well as his disciples who came after him. We ate lunch at a local restaurant just outside of the large tiled Mosque complex and then headed home.

On Friday, we headed out again in the morning, but this time for Joal-Fadiouth. Joal is the boyhood home of Léopold Sédar Senghor, the first president of Senegal. Senghor was not only the first president but also a poet and intellectual whose notion of “négritude” helped define post-colonial Senegalese and African identity. He was also Catholic. We started off the day with a visit to his father’s home.

From Senghor’s home, we headed to the southern end of Joal to the Isle of Fadiouth. Made of clam shells, Fadiouth has no motorized transportation and is a majority Catholic (80%) and minority Muslim community. A bridge takes residents to a second shell-island and a cemetery where both religious communities bury their dead. Most of us took small boats out and around the island before exploring the island in small groups. After a long awaited lunch, our final stop was a Baptist beach retreat center where we swam, played on the beach, and celebrated Jonah’s 21st birthday. We stayed until sunset before the final leg of our journey home. We did not get home until after 10pm, partly due to highway traffic stoppage to allow President Macky Sall’s motorcade to pass through Thies. 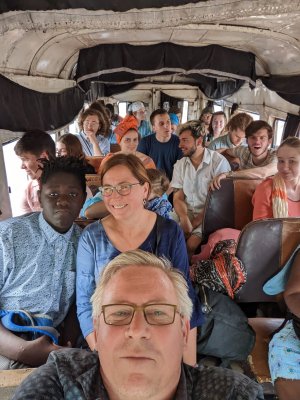