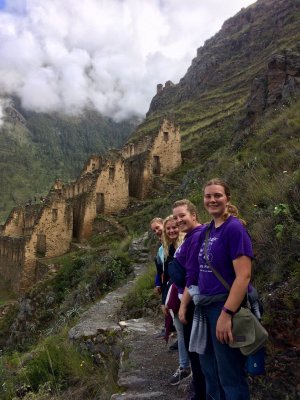 Our group spent the last week of the study portion in Cusco and the surrounding region known as the Sacred Valley. This region formed the heart of the Inca Empire which flourished in Perú from around 1400-1533 and extended along the Pacific coast of South America from Chile to Ecuador. Today, it is home to the thriving city of Cusco which sits at over 11,000 feet, as well as stunning ruins, Spanish colonial architecture and majestic mountains surrounding it all.

Our first day we took it easy, giving our bodies some time to acclimatize. After getting lunch, we rested for a couple of hours in our hostel. In the evening we ventured out to the Centro Qosqo De Arte Nativo where we took in an evening of traditional Andean music and dancing. The Centro Qosqo, formed in 1924, was the first cultural center founded in Perú for the preservation of the traditional culture of the Andes and the Quechua language. Dancers performed a few of the 70 traditional dances from the provinces of the Cusco region. Elaborate and colorful traditional dress added to this feast of sight and sound. Afterward we had a late dinner, where we celebrated service coordinator Willy’s 50th birthday. Happy birthday Willy!

We left Cusco by bus for the town of Chinchero. Our first stop was a women’s weaving cooperative where we had a demonstration of ancient techniques still in use in their hand-woven textiles made from sheep and alpaca wool. We saw the process of cleaning the wool with a natural detergent created by grating the saqta root, as well as the process of spinning the wool into yarn by hand. We also saw the various plants and bugs (!) used to make the natural dyes. The cochinilla is a relative of the aphid which lives on the cactuses which are plentiful in Perú and produces a dark red dye when squashed.

From the cooperative, we returned to the center of town to tour the colonial church in Chincero, which was built in 1607 on top of a destroyed Incan temple. Inside, we saw beautiful original murals covering the walls, and a giant primary altar adorned with gold leaf. Catholic masses and celebrations are still held in this church today. We also explored some agricultural terraces and stone pathways that were just a short walk from the church.

Our next stop after leaving Chinchero was the Moray archeological site. Due to heavy rains, the bus couldn’t make it up so we hiked the mud-filled road to reach the site on foot. It was well worth it. The site contains four giant sets of concentric circles created by the Inca in a naturally occurring sinkhole. The exact use of these circular terraces is unknown but archeologists speculate that they were a kind of agricultural laboratory to create crop variations, or that they functioned as a ceremonial location for the worship of the water element.

Our final stop in the area was the salineras outside the town of Maras. These salineras, or salt mines, have been in use for thousands of years. Using a source of warm salty water that comes out from the nearby mountain, the site has been engineered so that this water is diverted into hundreds of small channels that send the water into the over 5,000 individual wells on the site. During the dry season (June, July, and August), the water evaporates and salt is harvested from the bottom of the ponds. These individual pools belong to families in the Maras and are passed generationally within families. From Maras, we took a bus to the town of Ollantaytambo where we had supper and rested for our next day’s adventures.

We woke up to a beautiful day in Ollantaytambo, a city at the northern end of the Sacred Valley and the former gateway to the Incan empire. Students took a steep, early morning hike to Pinkuylluna, an archaelogical site perched on a hill outside the city. Once there, they visited the remains of the colcas, or Incan storehouses, and were treated to a stunning view of the valley and the llama-shaped Ollantaytambo fortress on the opposite hillside.

Afterward, we visited a traditional casa andina, an Andean house displaying many common household and farming implements as well as objects of spiritual signficance. Willy demonstrated their uses, as well as explaining the cultural meaning behind many of the objects on display. Next, we visited the fortress of Ollantaytambo. This once ceremonial site and agricultural area became a military stronghold after the conquest, and was the site of one of the only major battles in which the Inca were successful against the Spanish. The site, which is high above the city, features numerous agricultural terraces which are taller than a person. It was a climb to the top, but of course, it was worth it.

After lunch and some time to explore Ollantaytambo, we boarded the train to Aguascalientes, the town which is the gateway to the Machu Picchu site. After checking in at our hostel, we had dinner and the students had a chance to try cuy, the Andean delicacy also known as guinea pig.

We woke up early to catch the bus up the mountain to the Machu Picchu archaeological site. Students donned their rain ponchos and patiently got poured on while standing in line for the bus. Upon arrival, we first hiked to Intipunku, or the sun gate, which was the traditional entrance into Machu Picchu from the famed Inca trail. It poured for most of the hike, but when we reached the top, the mist which had been covering the ruins cleared and we were able to get a wonderful view of the site from our perch at the sun gate. After some time spent admiring the view, we hiked back down to begin our tour of the ruins. Machu Picchu was built by the Inca emperor Pachacutec around 1450 as a royal retreat. It was inhabited by the priest caste who were responsible for the worship of the elements. It is also believed to have functioned as a place of learning, an academy of sorts for children of the elites. After several hours exploring the site, we took a bus back down the mountain, then a train back to Ollantaytambo, and then another bus back to Cusco. It was a wet, long and tiring day, but full of beauty and majesty as well.

We spent the day visiting sites around Cusco. Our first stop was Tipón, an archaeological site of fountains and still-functioning aqueducts. It is fed by an underground spring and served as a ceremonial site for the worship of water. We also took a short hike above the site for a great view of the countryside and a look at the water channels engineered by the Inca to direct water from the mountains to the fountains below. Afterward, we travelled on to the town of Lucre, where we had a lunch of fried trout and potatoes at a trout farm owned by Mennonite pastor Eloy Ayma. Our final stop for the day was Sacsayhuaman, a massive complex of stone that overlooks the city of Cusco. It is believed to have had a defensive military function as well as ceremonial functions. It features three levels of zig-zagged walls and massive stones. It was a sunny afternoon and we enjoyed seeing this final wonder of Inca architecture, and especially sliding down the natural formations of volcanic rock on the outskirts of the complex. At the conclusion of our tour, we walked to the lookout at the edge of Sacsayhuaman, where we had an amazing panoramic view of the city of Cusco.

After getting to sleep in a little, we packed our bags, and boarded the plane for Lima. Students returned to their host families one last time to wash their clothes and repack their bags for their next adventure — service! 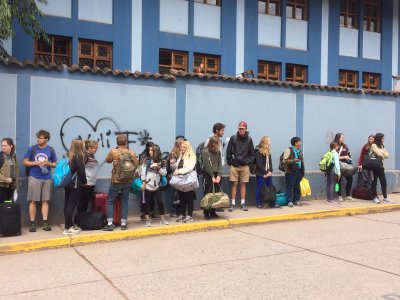 Over the course of Saturday, Sunday and Monday, students departed by bus for their service assignments and all are now with their new host families and getting settled in their new locations. We will resume our blog entries when we visit them at their service locations in Chincha, Chanchamayo, Ayacucho and Arequipa.