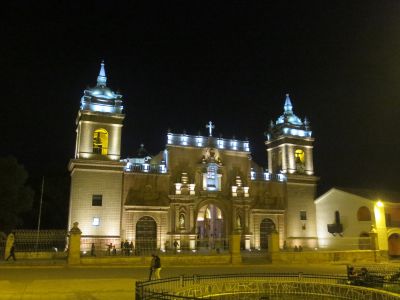 Kelly, Nikita and Mary are volunteering in the bustling capital of Ayacucho departmento (state).  San Juan de la Frontera de Huamanga, or simply Huamanga, is home to 170,000 people.  The city lies in a protected valley some 2,746 meters (9,009 feet) above sea level.  Known as the “City of Churches,” Huamanga was founded in 1540 and built around a large central plaza.  The grand architecture still stands, giving the city a colonial flavor that dates back hundreds of years.  People seem especially proud of the battle of independence that was fought on a mountainside not far from the city.  An army recruited from throughout western South America defeated the Spanish crown and in 1821 Peru finally gained independence.

Behind the aesthetic beauty of the colonial-era churches and statues of famous generals, however, lies a certain sadness.   In the 1970s a professor at the local state university, Abimael Guzman, founded a violent revolutionary movement called the Shining Path.  In the decade that followed tens of thousands of people, mostly peasants living in the rural communities that dot the countryside, perished at the hands of the terrorists or the soldiers sent to defeat them.  The legacy of the armed struggle is readily apparent in the lives of the widows and orphans who survived the violence and the countless stories of hardship and loss that still haunt the citizens of this highland city. 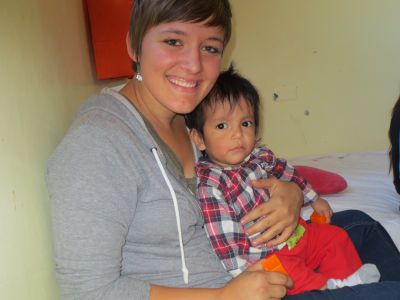 Kelly and Nikita spend their days holding babies and playing with children.  Hogar Casa Luz is an orphanage founded by a group of evangelical Christians from Argentina to provide a safe place for children whose parents have abandoned them or are unable to provide adequate care.  There are forty-three children living under one roof who often do not receive the attention they need.  Nikita and Kelly are there to share their love with the children, making them feel valued and special.  In the mornings they spend time with six infants, helping Jenny, who is usually alone with all six, keep them clean, fed and stimulated. 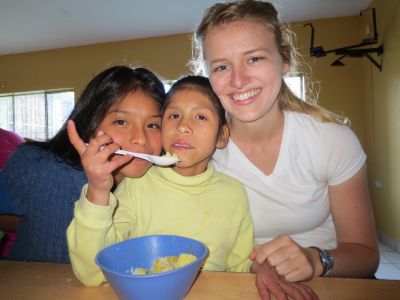 Later, as the older children begin to return from school, they welcome them home, help serve lunch and tutor individual students who need assistance with their homework.  Nikita is a curious and thoughtful observer who freely shares hugs and attention with the children.  Her respect and understanding for the members of the staff — from the cook to the social worker — affirms the work they do each day.  Kelly has a willing spirit, very bubbly and friendly, and is appreciated for her light-hearted nature.  She has formed strong bonds with the children by listening to their stories and sharing in their laughs. 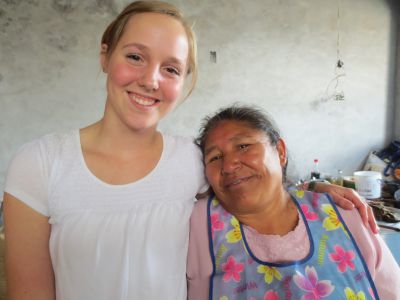 Mary volunteers at the Comedor Infantil Luz y Vida, an after-school program founded by her host family just four months ago.   There is a lot to do — arranging tables, cooking, serving lunch, washing dishes, teaching English and, recently, translating for a group of North Americans who spent a week there replacing the roof of the three-story church facility.  Mary accompanies her twenty-seven-year-old host sister Mabel to work each day.  She shops for food at the local market with the cook, Olmorato, then helps prepare lunch for sixty children.  The kids arrive in two groups, a dozen in the late morning (before the afternoon shift at the local school) and the rest in the early afternoon.  Mary has a keen interest in health and nutrition.  When asked to teach English to each group, she taught the names of vegetables.  Mary is kind and curious and loves learning new things.  Her host father Romulo, who pastors the church housed in the same building, is very pleased with Mary’s commitment to the project: “She is the first to arrive each morning and the last to leave each day.”

“Here in Ayacucho the atmosphere is very relationship based.  People are generally relaxed and appear to approach life without an agenda.  One sign of this is the fact that babies and small children are always with their parents.  Society is not as focused on the task at hand or on the question of time and efficiency.  Instead the emphasis is on family and responding to the moment, or the person, who is present.”

“Religion is very important and defines who you are.  People don’t seem to spend money flippantly but save it for things that matter and are useful.  They do not buy a lot of fancy clothes or decorations for their houses.  Entertainment and socializing often revolve around food.   Compared to my family in Lima, my family here does not seem to glorify the US as much.  Sure, they want to learn English and are interested in our culture, but I think they are content with their lives in Peru.”