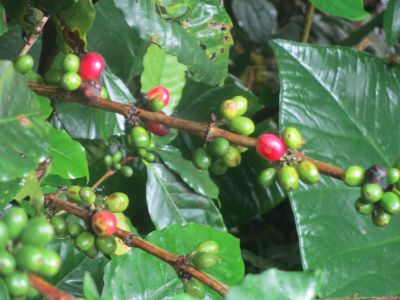 Jesse volunteers at a family-owned coffee farm called Fundo Almorique.  Coffee is the second-most traded product in the world, second only to petroleum in its importance as an export.  Hundreds of millions of people drink coffee each day, enjoying the aroma of a freshly-brewed cup and feeling the lift generated by a dose of caffeine.  But most of the people who enjoy the beverage know little if anything about where it comes from or how it is produced.  While coffee is consumed in large quantities in the Global North it is produced in the Global South, mostly in tropical countries located in Central and South America, Asia and its birthplace, Africa — the beverage originated in Ethiopia. 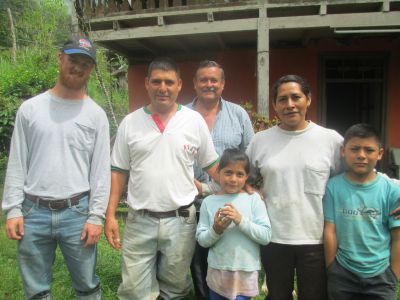 Jesse is spending his time on service with the Gerbi family, descendents of Italian immigrants who came to the Chanchamayo region of Peru’s central rain forest in the 19th century.  Martin, who still lives on the farm started by his great-grandfather, is the youngest of six siblings.  Martin’s wife, Nancy, and their two children, Giordana and Mirella, divide their time between the farm and the city of La Merced, a 45-minute drive down the mountain.  The local school closed a while back, so the children must study in town.  But they travel back to the farm every chance they get to be with their father, who spends the bulk of his time there overseeing the operation of the plantation.  Besides coffee, they grow bananas, corn, peppers, avocados and several varieties of tropical fruit. 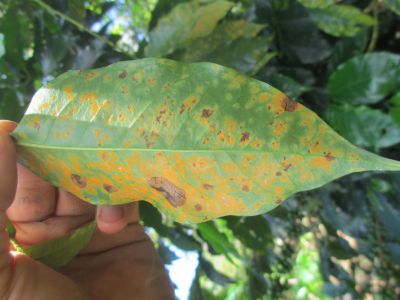 The locals refer to this season as “winter” in the jungle, the wet season, and harvest should begin soon.  But a fungus has caught hold in most of the coffee plantations this year and the leaves that are normally waxy and green are turning dull and yellow on their undersides.  Some blame it on climate change — the normal weather patterns have been disrupted and the rhythm of wet and dry seasons has been replaced with chaotic fluctuations in rain fall, sun shine and temperature.  Whatever it is that is causing the fungus outbreak, the effect will likely be devastating.  Martin isn’t sure what kind of crop he’ll get this year — let’s hope he and his neighbors find a way to prevent the damage done to the thousands of coffee bushes they have nurtured for years, many for decades. 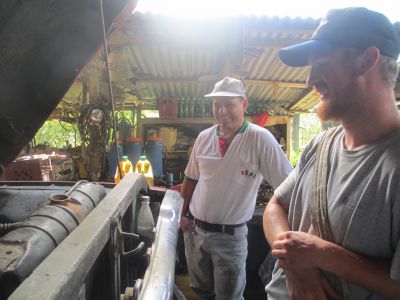 Jesse helps out in a variety of ways, from accompanying Martin on his visits to the fields to assisting with repairs to an ancient — but still running — jeep.  He has learned a lot about the coffee business, from crop management and applied economics to the art of shelling and roasting green coffee beans.  Jesse is eager to help out wherever he can and Martin appreciates having someone around who is genuinely interested in farming.  Jesse asks a lot of questions.  And it turns out that his knowledge of the finer points of US agriculture, such as the optimum moisture content of harvested corn, can be applied to agriculture in the rain forest: the moisture content of green coffee beans is a key variable to both farmers and buyers alike.  Jesse fits in well with the “bachelor club” at the farm — father Martin, cousin Moises and uncle Juan are the only ones living here during the week.  Jesse is willing to help out in the kitchen, play chess while its raining and be a genuine support for Martin while he faces what might turn out to be a devastating loss of his primary crop.  Jesse’s farming background helps him understand all of this.  And his gentle nature helps him figure out what to say, and when to keep quiet.