Liz and Kate spend their days with little ones.   Parents are busy with work, chores and activities outside the home.  This is true all over the world, of course, in the Global North as well as the Global South.  But the pressures on parents are especially acute in the mountains of Peru, where many families live on what they earn each day.  The prayer “give us this day our daily bread” is a reality, not a metaphor.  Anyone of working age needs to devote themselves to activities that generate income.   Sadly, many parents grew up without positive role models, not only due to economic pressures and injustice, but due to the ravages of war.  A generation of adults was lost during the time of terrorism in the 1980s and early 90s, when 69,000 peopled died either at the hands of terrorists or of the soldiers sent by the government to win the war on terrorism.  Over half of the victims were here in Ayacucho Department.  Countless more were injured and traumatized, leaving them unable to function at full capacity.  For these and other reasons, many children living in the marginal neighborhoods at the edges of the growing city of Huamanga do not receive the love and attention they need to thrive . 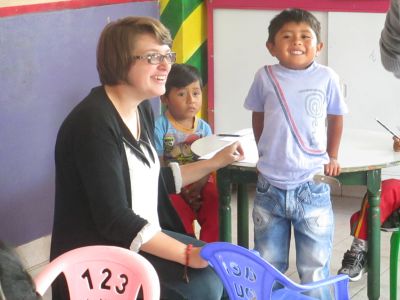 Liz volunteers at Vidas Kindergarten (Lives Preschool) in San Melchor, one of the poorest neighborhoods in Huamanga.  In North America, kindergartens are typically a place where five-year-olds prepare for first grade.  But the children Liz works with are much younger.  Parents and older siblings drop off their two-, three- and four-year-olds each morning before heading off to work or other activities.  If these kids were not here at Vidas it is unclear where they would be — or who would be taking care of them.  At Vidas the children enjoy the full attention of a devoted teacher and, for the next few weeks, the novelty of a nurturing North American’s presence.  Liz and the teacher she works with, Carina, keep the children busy and stimulated, from introducing numbers and letters to teaching basic English vocabulary to spending time outside in the playground each day. 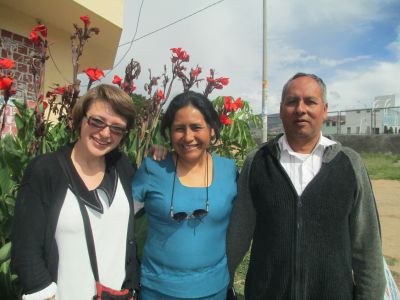 Liz’s host mother, Raquel, is the founder of the Vidas project that includes both the Kindergarten and the medical clinic located in an adjacent building.  While waiting for the school year to begin earlier this week Raquel asked Liz to help put together funding proposals for the Vidas program,  in hopes of securing more support from English-speaking donors to ease the financial strains the organization always faces.  Parents pay to send their children to the preschool, but the tuition people can afford in this part of the city cannot cover the cost of paying for the teachers, supplies and utility bills.  Liz’s skills in writing and her background in education have been invaluable to the organization as they seek to offer the neighborhood children the care and attention their parents cannot provide. 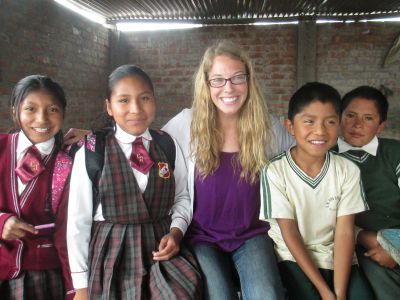 Kate volunteers on the opposite end of the city.  She works with older children at a Comedor, a word that is difficult to translate into English.  The word could be rendered as “dining room,” but the children receive much more than a free lunch when they climb the steps to the third floor of Comedor Luz y Vida (Light and Life).  Kate begins her day at 8 am, going shopping at an outdoor market with Jhoel, the cook, to buy ingredients for a low-cost but healthy meal.  She helps prepare lunch until the first group of 8-10 children arrives at 10 o’clock.  She gives them an English lesson when they arrive, then  helps them with their homework until it is time to eat.  At 12:30 the first group of kids leaves for school — the schools are so crowded they operate two shifts.  The dishes are washed and the teaching materials are put back in order in preparation for the second group, this one with 30-40 children.  Kate repeats the English lesson, helps serve lunch and then spends time tutoring individual children who need help with their homework. 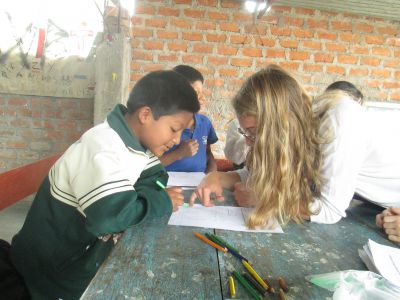 After the last child finally leaves for home, Kate and the director of the program, Mabel, go downstairs to Mabel’s home, where an internet cafe started by her family to generate income operates out of the front room.  Kate logs onto one of the computers and spends the rest of the afternoon putting together worksheets for the next day’s English lesson.  But this is not all — shortly before our visit Kate was asked to help translate during a Wheels for the World mission trip in a village a half hour from here.  The North American participants came to Peru to donate used wheel chairs, walkers, crutches and canes as well as offer free medical consultations to the people of San José de Ticllas and surrounding villages.  The problem was, only one of the North American team members spoke Spanish.  Kate was asked to help translate and readily agreed.  As it turned out, when she arrived last Saturday she learned that she would be translating for the inauguration ceremony, attended by hundreds of people, interpreting Spanish speeches into English for the North Americans.  For the next several days she accompanied individual doctors, helping them communicate with the disabled patients who flocked to the medical campaign.  Had she and two other Goshen College students, Edgar and Cortney, not been available to help out with the campaign it is unclear how much communication between the English-speaking North Americans and the Spanish-speaking Peruvians would have occurred.  Kate is bright and outgoing — her positive attitude draws people in and makes the children eager to learn all they can during this rare chance to learn English from a native speaker.