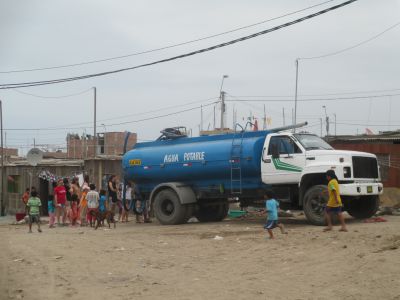 “Water is life” — these words are painted on a wall in one of the settlements far from downtown Lima.  The problem is, people living in the Chavin de Huantar neighborhood of Villa El Salvador still don’t have it.  There are no pipes bringing water to their homes. And there are no pipes taking water away,once it has been used, for treatment or disposal.  Instead, huge trucks deliver water each day, charging between 25 and 75 cents to fill containers of various sizes set outside the front door of each house.  On a per gallon basis, these prices are exorbitant, much higher than the rates people pay for piped water in the wealthiest neighborhoods of Lima.  But the people living here in Chavin have no other option. 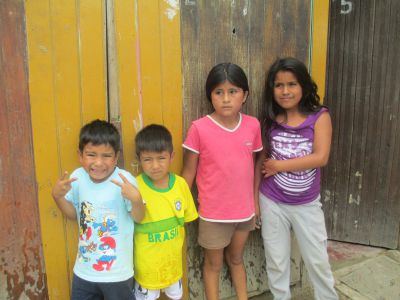 For fourteen years the residents of this unplanned community have lived bucket-to-bucket, dipping water for cooking, washing and cleaning from the containers that are stored outside their homes.  And when the water is ready to be discarded it’s either tossed into the street or poured down the hole in the back of the house that serves as a latrine.  Living without running water and a sewage system is perilous.  The dirt streets where children play are contaminated with the water used for dish washing and laundry.  Animal feces litter the streets as well, but the lack of rainfall in this desert city keeps the contaminants from being washed away.  Given the high cost of water, and its lack of purity, people don’t have the habit of drinking much — water needs to be boiled before it can be consumed.  All of this means that treatable and often preventable illnesses such as diarrhea, parasites and respiratory infections are extremely common among Chavin’s children. 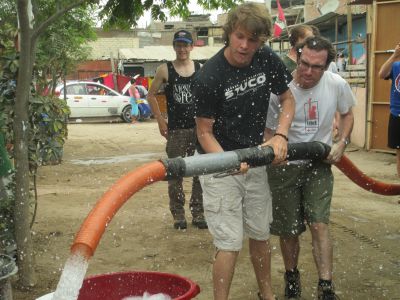 To better understand this reality — learning about life in one of Lima’s most humble sectors and, hopefully, doing a little good in the process — we arranged for a service project in Chavin de Huantar.  The idea was to use funds donated by a North American friend to purchase three truckloads of water and spend a morning walking from house to house behind the trucks, giving water away to anyone ready to receive it.  As it turns out, this summer is the hottest on record in Lima.  Seeing us approach, people set out plastic containers, and several parents produced small swimming pools which they placed in front of their homes, in the hope we would fill them up.  We gladly obliged and were delighted by the thought that hundreds of neighborhood children would have a chance to cool off and enjoy some good, clean fun.