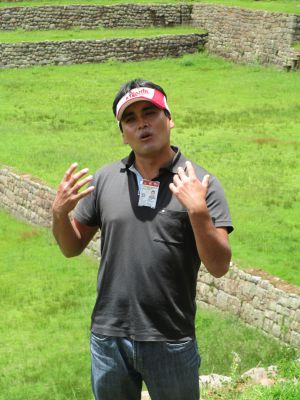 The Inca culture constructed palaces, fortresses and temples that were built to last.  Made from massive stones that were tightly fit together, these structures are impressive in their cunning engineering and enduring beauty.  Our first visit to an Inca archaeological site took us to a little-visited placed called Tipon.  According to one theory, it was here that the Inca Pachacutec, the royal leader responsible for expanding the empire far beyond what we now know as Peru, asked his engineers to research and develop water delivery technologies.  According to our guide, Hector, the channels and fountains we observed depended on two water sources.  One source, surface water from melting glaciers, has dried up due to changes in climate over the last several decades.  But the other source, a series of deep underground springs, is still in operation today. 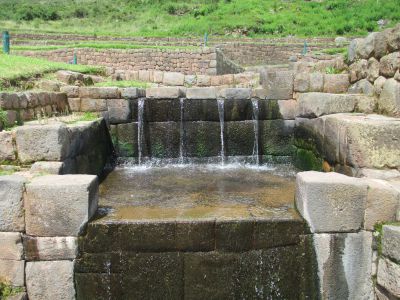 Equity was, and still is, considered an extremely important value in the Andean world.  The Inca’s popularity depended on how well the people who lived under his rule were fed, clothed and otherwise provided for.  For example, it was vital to each community in the realm that the Inca’s administrators provided equal access to irrigation water .  A marvelous manifestation of the concept of fair distribution is a fountain at Tipon that divides a single stream of water into four equal parts.  The Inca empire was divided into four suyos, or regions, and this fountain symbolized the equal allocation of resources to each part of Pachacutec’s domain.  Amazingly, the fountain is still dividing the waters into four nearly equal shares seven hundred years after its construction. 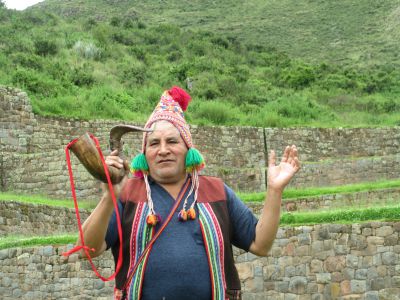 While at Tipon we had a chance to experience another ancient manifestation, this one of Andean spirituality.  During the previous week we learned from one of our speakers, Juan Carlos Machicado, about the worship of a dualistic Creator God:  Wiracocha (the creator) and Pachamama (mother earth).  At Tipon we had a chance to witness a curandero (native healer or shaman) enacting a pago ceremony for Pachamama.  The ceremony resembled an offering of sorts, intended to thank Pachamama for earthly blessings and enlist her help in providing other needed things.  In the ceremony we witnessed, the curandero, who goes by the name Huaracino, placed a variety of items — corn kernels, seeds and leaves as well as decidedly unnatural things, including a small plastic house, a car and a replica of a $100 bill — onto a large piece of paper.  He invoked the names of various Apus, or protector mountains, and then wrapped up the package, which was later burned. 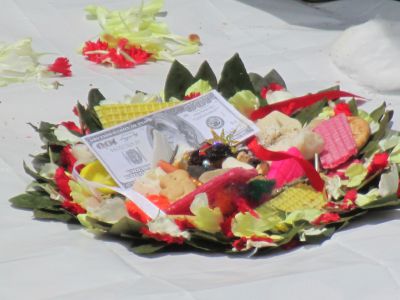 This type of offering is common here, the practice going back hundreds, probably thousands, of years.  When rural people take a drink of chicha, a corn-based beverage, they often pour a bit onto the ground to give Pachamama the first sip.  As for the pago ceremony we saw at Tipon, Huaracino informed us that August is the month most frequently used for making offerings, but he claims he is busy almost every day of the year helping his friends and clients show their respect for Pachamama and receive her blessing for their businesses, their love lives, even their grades in school.  In addition to offerings, curanderos are involved in a variety of ceremonies intended to bring healing to those suffering from illness or injury.  In fact, several of the Peruvians in our presence while at Tipon recounted times when they were sick or hurt and the services of a curandero were enlisted to help bring about their recovery.  These ancient practices are still prevalent in the Andes, a first source of assistance that is often called upon before western medicine.