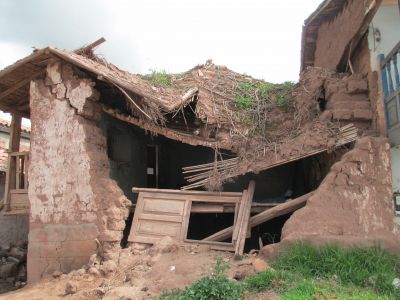 This is the rainy season in the Andes.  But the rain that fell this week is nothing compared to the torrent that lasted four days back in January 2010.  That extraordinary storm flooded the Cusco region, closing the airport for several days and the railroad line to Machu Picchu for several months.  Homes, businesses and fields were washed away in the flooding.  And the tourist dollars that pump up the local economy disappeared for a while, meaning that people had to deal with both the loss of their assets as well as a drop in their incomes. During the months and years that followed, several groups of Goshen College SST students traveled here to help clean up the damage and aid in the recovery. 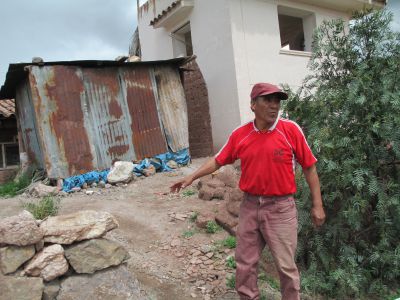 Goshen Tambo is a chance to take a break from the academic activities of the week and reflect on the bigger picture.  Tambo focuses on spiritual development and emotional well-being in a cross-cultural context.  For this week’s Tambo, we ventured out to the site of the flooding in 2010.  We began in the village of Huacarpay, where several of the adobe houses destroyed by the flooding are still standing — sort of.  We met a man who was building a new home next to his old adobe structure when the floods came.  He told us the story of what happened to his family and showed us the stone wall that Goshen College students built a year afterward to help protect his home should the waters rise again.  Then we traveled to an archaeological site near Huacarpay Lake built by the Wari people, predecessors to the Incas.  We listened to the story of the great flood, drawn from Genesis 6-9, and reflected on what it might mean for people today.  Light rain fell as we went around the circle sharing our thoughts and feelings. 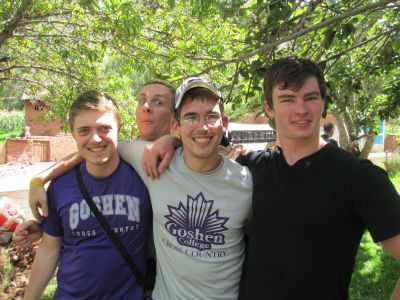 By now we were getting hungry.  Our plan was to hike to the nearby village of Lucre, tracing a route that included a raised trail through a wetland, several dirt roads, a corn field and an ancient road carved out of the hillside untold centuries ago.  At one time this road linked Lucre to the Lake Titicaca area in what is now Bolivia.  Along the way, we sampled raw kernels of the first corn of the season and chewed on fresh corn stalks — surprisingly sweet!  After losing our way at one point, two surprised but very kind women with several children in tow helped us find the right path to the village.  We arrived in Lucre ready for a hearty meal of fresh trout, mote (boiled corn kernels),  golden potatoes and a salad of lettuce and potatoes.  We toasted our trip with frutillada, a refreshing beverage made by boiling together corn, strawberries and peaches — cold and delicious! 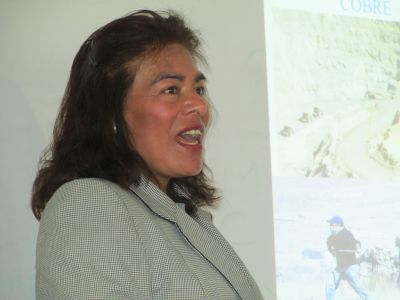 In the afternoon we returned to Promesa School for Spanish classes.  The next morning we resumed our series of lectures and workshops with a presentation on mining by Catalina Jiménez Aguilar, a professor of agronomy at San Antonio Abad National University in Cusco.  Founded in 1692, UNSAAC is the second oldest university in the nation.  Professor Jiménez described the benefits and costs of mining in Peru, helping us to think more broadly about the impacts of Peru’s leading export industry on its economy, society and environment.  Mining is a tremendous source of export income and provides jobs to tens of thousands of Peruvians, but Professor Jiménez took time to also explain how mining changes the social fabric by sending men away from their families for weeks at a time — alcoholism, prostitution and new diseases emerge in the mining towns and the children back home grow up without their fathers.  In addition, the mining operations, especially the informal mines operated without permits, pollute the air, water and soil, making it difficult to sustain the agricultural life that has evolved over the centuries. 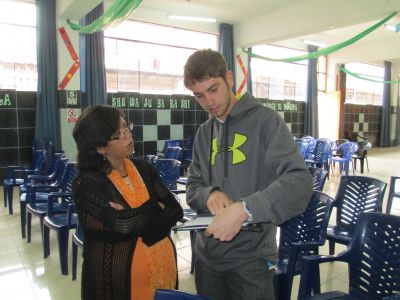 Quechua is the language traditionally spoken by the people who reside in these mountains.  An official language of Peru, it is spoken in one form or another by upwards of 10 million, including populations in Ecuador and Bolivia as well.  This makes it the leading autochthonous (indigenous) language in South America.  Luz Atapáucar learned Quechua as a child by visiting her grandmother in the village of Maras each summer.  Later she studied Quechua in school and today teaches it to professionals, e.g. doctors and attorneys, who have clients that do not speak Spanish.  Quechua is onomatopoeic — many words sound like the object they are describing.  It also makes extensive use of suffixes to modify words.  This means that words can be very long and melodious.  Luz helped us understand the basic structure of the language, taught us some simple phrases and led us in a a song called Chinka Chinka, a romantic ballad.  Many of the students live with host family members who still speak Quechua and this was a great chance to learn something about their mother tongue.  Allin P’unchay!  (Have a great day!)