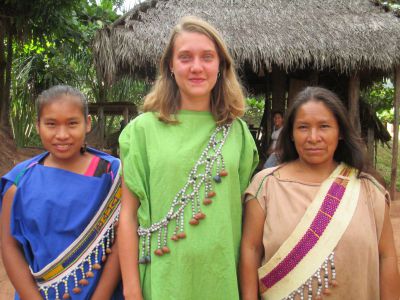 The Perene River, a tributary of the Amazon, floods during the months of December through April.  The rushing waters leave generous deposits of sand along the shorelines, making nice beaches for bathing during the dry season.  The village of Boca Ipoki lies on the shore of the Perene River and its inhabitants, which number perhaps one hundred, bathe, fish or wash clothes in the river daily.  At only 525 meters (1,722 feet) above sea level, this is the lowest and warmest service location this semester.

Boca Ipoki was established in the 1980s by native Ashaninka people fleeing the Sendero Luminoso guerrillas during their conflict with the government.  The village school and medical post were built close to the river and fifteen years ago were washed away after an unusually wet winter.  The village has been slow to recover.  Several years ago its president, Roberto Boliviano, donated land passed down to him by his father as a site for a new primary school.  Electricity and internet service have arrived and earlier this year a nonprofit organization, Servicios Educativos de Promocion y Apoyo Rural (SEPAR) — loosely translated as Educational Services for Rural Promotion and Assistance — donated a computer.  Parents are anxious for their children to begin developing computer literacy. 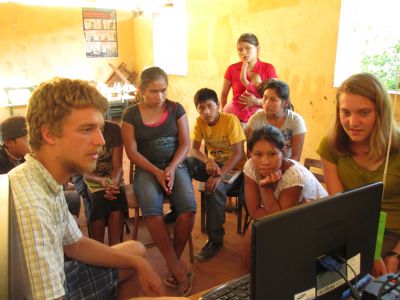 Lucas and Sophia are working with the nonprofit organization Ecomundo to teach children as well as adults the basics of computer operation in this native village.  In the mornings they teach a group of 8-10 school children how to use programs such as Word and Excel.  In the afternoons they teach similar skills to adults and young people.  Keyboarding, using all ten fingers, is new to their students and it is rewarding to see how development of this skill can speed up their typing.

In the past the village has been handicapped by its inability to produce written documentation for legal, business, governmental and other affairs.  Village leaders hope that the training offered by Lucas and Sophia can enable them to generate the letters, reports and contracts they need for successful interaction with the outside world.