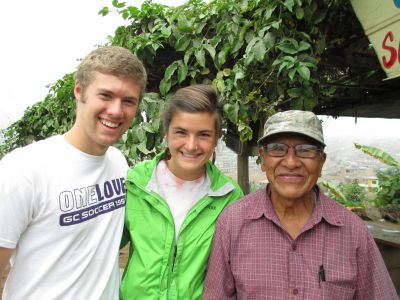 As we approach the end of our study time in Lima, we deepened our perspective on what it is like to live and work here by listening to speakers who have migrated here from other places and then traveling to the edge of this sprawling metropolitan area.

Father Jeff Klaiber is originally from Indianapolis.  He came to Peru to work as a priest and learn about liberation theology in the 1970s.  An author and university professor, Father Klaiber taught us about the role of the Catholic Church in Latin American politics over the last 200 years.

Jerry Acosta is originally from Tingo Maria, a small city in the foothills of the rain forest.  He fled from his hometown with his wife and daughter in the 1990s after being threatened by terrorists.  A banker, Mr. Acosta taught us how the Shining Path movement gained power, laundered money and tore the social fabric of his community.

Camilo Ballumbrosio is originally from El Carmen, a rural village located south of Lima.  His ancestors were brought here as slaves from West Africa to work in the mines and, later, in the cotton and sugar plantations located along the coast.  A musician, Mr. Ballumbrosio taught us how his people found relief from oppression through music, developing a new percussion instrument called a cajon.

Nester Vergara is originally from Iquitos, a large city on the Amazon River.  He left his hometown to study at San Marcos University in Lima and soon married and settled here.  A psychologist, Mr. Vergara taught us about the social problems faced by migrants, who move into the shanty-towns on the edges of the metropolitan area, and their children, who have no roots in the countryside and find themselves struggling to survive on the margins of society.

When families move here from the mountains, rain forest or others parts of the coast, they often occupy unused land on the edges of the city and build homes out of whatever they can afford:  estera (reed mats), triple (inexpensive plywood) and, eventually, concrete block or brick reinforced with rebar.  They typically live for years, sometimes decades, without public services like water, sewer, electricity and paved roads.

To learn more about migration and understand the changes happening in Lima, we made an overnight visit to Villa Maria del Triunfo, an hour south of Good Shepherd Church in Miraflores.  Alicia Taipe Tello settled here with her husband and first child over thirty years ago.  She described what it was like to “invade” the land with a group of several hundred families.  Her family overcame hardship and was eventually able to construct a two-story home of material noble (reinforced concrete block) that she shares with her children and grandchildren.