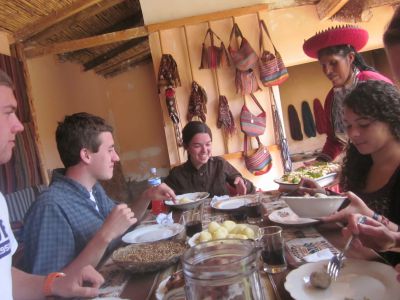 Every culture must find a way to feed and clothe its members.  During our time in the Andes we have tasted many dishes and observed how people protect themselves from the elements.  To learn more, we took a day-trip to the town of Chinchero and a nearby archaeological site named Moray.

Chinchero is home to the Andean Weaving Center, a family-operated business that employs local women to produce textiles and demonstrate their techniques.  The center is home to a small group of llamas and alpacas and we learned how their wool is dyed with natural colors, spun into yarn and woven into cloth.

The staff at the center also offer traditional foods to groups like ours by special arrangement.  We sat down at a table set for thirty and feasted on a variety of local foods, including the prized cuy (guinea pig), habas (broad beans), canchita (toasted corn) and trigo (toasted wheat).  Since before the days of the Incas people living in these mountains have learned to preserve food for the lean years and we tried two types of potatoes that are soaked  in a river then dried (moraya) or freeze-dried for a few weeks in the open air (chuno) and stored for up to five years before consumption.

We have heard that Peru has 3,000 varieties of potatoes and many types of corn, beans and other crops.  And we have learned that each variety is adapted to a particular altitude and growing condition.  How did the Inca people develop so many types of crops and figure out which grew best in each locale?

Our guide, Oswaldo Palomino, explained how the concentric circular terraces constructed in a ravine known as Moray served as an agricultural experiment station.  Engineers cross-pollinated different varieties here and then planted them on each terrace to see where each type grew best.  Apparently, they were very successful — when the Spanish conquistadores arrived in 1532 the Inca Empire was home to over 10 million inhabitants.