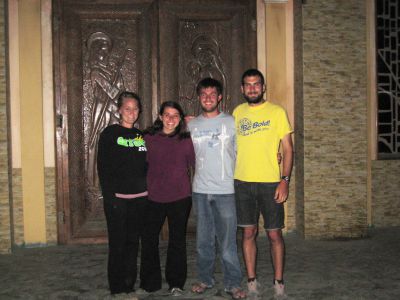 Most travel guidebooks give minimal attention to Chimbote, highlighting the north-coastal town´s ever present fish smell. ¨This roguish port town is not a tourist destination, and there´s little to do,¨ is Lonely Planet´s assessment.

It´s true that much of the reality here is bleak. According to the Pan American Health Organization, at least 45 percent of Chimbote’s residents live in conditions of extreme poverty. The international aid organization CARE reports that the average Chimbotano earns only around $300 each year, and the Worldwatch Institute reports that life expectancy in Chimbote is 10 years lower than Peru’s national average.  But more than 400,000 people continue to call Chimbote home–including four SSTers who are living there for six weeks, working at the Los Amigos Center.

In areas where Los Amigos operates, the unemployment or underemployment rate is believed to be as high as 87 percent. So when Jackson, Julia, Kayla, and Tim arrived in Chimbote they had an idea of the harsh reality that they would be facing. While they’ve found that, they’ve also found some amazing people at Los Amigos—both the Peruvian staff and volunteers from abroad—working in their various programs and creating a vibrant community.

Jackson has been helping with preschool-aged children in the cuna (nursery) at Los Amigos in the mornings, while Julia teaches English to children at the different bibliotecas (libraries). Their hands are full with young, active learners. On Wednesdays Julia shadows a social worker making home visits. In the afternoons Jackson and Julia are joined by Kayla at one of Los Amigos’ several casas de prevencion (after-school programs), where they provide homework assistance, teach English, and direct games for the children there.

Kayla and Tim are working with teenagers in the Casa de Juventud. They both provide homework help to high school students, and they both are able to share their own passions: Kayla teaches dance classes three mornings a week, and Tim has been teaching art classes, making the most of limited resources to encourage creativity.

The SSTers´host families live within a few blocks of the center, so they can easily walk to work. And four times a week, all four SSTers take to the soccer field with other volunteers and Los Amigos staff members.

One day during our visit they held a despedida (going away party) for one long-term volunteer. The SSTers made a cake and decorated the party space—and had a great time at the despedida!