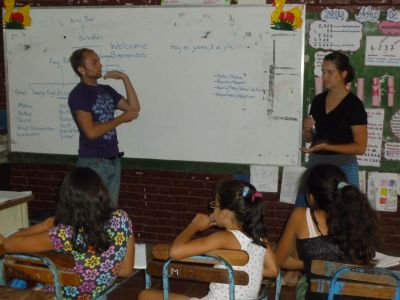 Martin and Alisa are in El Lagartillo, a remote community in the northern mountains of León. On weekday afternoons they teach English classes to a group of children ages 8-11. The classes are voluntary, so the number of students varies each day from a handful to several dozen, but this doesn’t deter Martin and Alisa. They create and plan each day’s lessons together and co-teach these interactive sessions.

On the day we visited, they used a diagram of Alisa’s family tree to teach the words for members of the nuclear and extended families. Our presence seemed to inhibit the students a bit at first, but it didn’t take long for them to begin calling out, “uncle,” “grandfather,” “son,” and “niece” in response to their teachers’ questions about Alisa’s family members.

Some background about El Lagartillo

Our last field trip before students left for service included an overnight  visit to El Lagartillo. In addition to getting a first-hand look at life in the campo [country], we met and spoke with individuals who lived through some of the tumultuous events we had only read and heard about in our study of Nicaraguan history to date.

The community of El Lagartillo was originally formed as a cooperative in 1983 as part of the agrarian reform program implemented by the FSLN (Sandinista party). In addition to material aid, these 26 campesino families received land that had belonged to Somoza family cronies for three decades (Somoza was the dictator ousted by the Sandinista revolution in 1979). This made the cooperative a target of the Contras, U.S.-funded counter-revolutionaries intent on destabilizing the new government.

The Contras attacked El Largartillo on the morning of New Year’s Eve 1984, when most of the community was out working in the fields. Only fourteen people were present to defend the village against 100-150 Contras. Six members of El Lagartillo were killed, two of whom were 14-year-old boys. Those who escaped fled to a neighboring town, and when they returned, they found all of their belongings gone and the newly-constructed school house (one of only three buildings at the time) burned to the ground.

The brutal attack could have destroyed the community entirely, but the citizens of El Lagartillo decided to come back and work even harder to create educational opportunities and a better life for their children than had been possible under the oppressive dictatorship. Although the loss of the FSLN’s Daniel Ortega to Violeta Chamorro in the 1990 presidential election signaled the end of government-assisted cooperatives, the residents of El Lagartillo stayed there and have continued to operate and govern themselves based on the values of fairness and communal effort for the common good. It has not been easy, and the struggle continues as the effects of climate change disrupt growing and grazing patterns. Their effort to provide opportunities for their children has paid off, though: community leaders proudly report that the village now has two schools, and every child graduates from high school and goes to college.