Cora works with Libros para Niños (Books for Children), an organization in Jinotepe that promotes reading.   An earlier date for Maria to visit Cora at her work was rescheduled for this past week, when Maria visited Cora in the central park of the town of Dolores.

Central American towns all have a central park, and the central park often has a kiosk in the center.  In Dolores the kiosk is where Cora works with two other women reading books to children, giving them time to read on their own, and loaning out books.  In a circular room at the base of the kiosk the organization has a small library.

The day begins at 8:00 with the arrival of a class of first-grade students from a local school. Cushions were handed out for the children to sit on the floor, and the session began with one of the women reading a story using a Japanese technique of having a special wooden box displaying laminated pictures to the students while the presenter reads from text behind the box.  They find this gives better interactions with the students.

Afterwards they put 150 books in two baskets, from which the students pick and choose which books they want to read themselves.  When finished reading, the students can also check out books to take home.  When the time for the first grade students was finished, they were replaced by a class of second-graders that came, and so on through the morning.  After the class of sixth-graders finished, there is open reading time when older students can come.

Cora has lunch each day with one of her two co-workers, and in the afternoons on Monday-Thursday she goes with them to do similar work in Jinotepe until 6 p.m.  Every Friday, afternoon, however, she stays in Dolores, where sometimes they have Viernes Locos, Crazy Fridays, where they come dressed in different costumes.

The program works in a few other locations in the area, and sometimes they travel to small rural communities to offer the same activities. 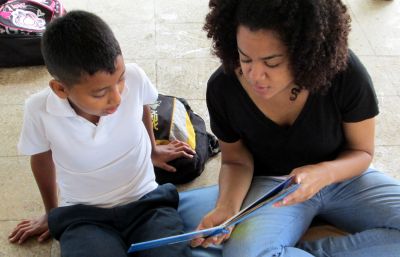 Maria did a brief survey with the students, asking them which books were their favorites.  Although most of the books are translations of popular children’s books in the U.S., by far their favorite was Las Cinco Noches Arrechas (The Five Angry Nights), a folk tale that takes place in Nicaragua.