From shortly before our field trip to Matagalpa and in the following days we have a number of smaller events to share. 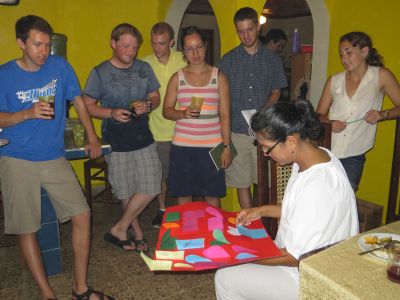 At our twice weekly Coyunturas we realized that during our lunch on the back porch we were getting regular visits from Nicaragua’s national bird, the guardabarranco (ravine watcher), which is easily distinguishable by its bright colors and long tail with two partially bare shafts.

At one of the Coyuntura meetings which coincided with Mother’s Day in Nicaragua, May 30th, the students also surprised Maria with a mega-card (which included 20 individualized cards) and a rendition of a traditional Nicaraguan Mother’s Day song they had memorized in Spanish class. 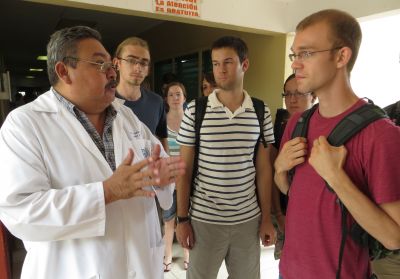 On Wednesday June 5, part of the students took a field trip to the large Jinotepe public hospital, while the other part went to a small clinic in the neighboring town of La Concepcion.  Since 1979 healthcare has been free in Nicaragua for those who cannot afford it.  Students were impressed to hear that included not only a consultation, but the cost of necessary exams (blood tests, x-rays, etc.) and even the medications.  The pre-med students in the group were impressed to hear that medical school is free; on the flip side, doctors’ average salaries are about $400-700 per month.  [Earlier we had learned that the average teacher’s salary is about $225 per month.]  Students also noticed that instead of individual rooms for patients, a dozen or so typically share a large room.  For those with the financial means, private hospitals are also available, but the costs are still far below U.S. prices. 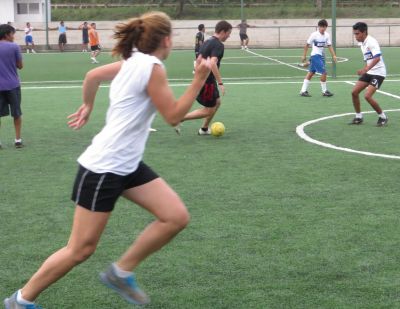 On Thursday we sought to redeem ourselves from our prior athletic losses, on both the Atlantic and Pacific sides of Nicaragua, in soccer and volleyball.  We decided to go back to what is most familiar: soccer.  To increase our chances of finding at least one team in Nicaragua that we can beat, Maria arranged for us to play a round-robin with two other teams, one a youth club team and the other a team from the church Benson attends with his family.  We played several games.  Our goalie Aaron S made several spectacular saves.  We scored several goals.  And we lost every game.  Perhaps we should ask to compete with Nicaraguans in bobsledding from now on.  After the double drubbing we invited the other two teams to join us for pizza, and this went a long way towards easing the pain.

On Friday we went to visit a large, long building outside of town that we’ve driven by several times, which had earlier prompted students to ask what goes on inside.  We’ve actually passed several such large large buildings during our field trips, and often seen large numbers of Nicaraguan workers outside during rush hour.  These are maquilas, large clothing factories international companies operate in special free trade zones designed to attract foreign investment.  The one we visited outside Jinotepe is run by Gildan, a Canadian company that makes t-shirts in this maquila. 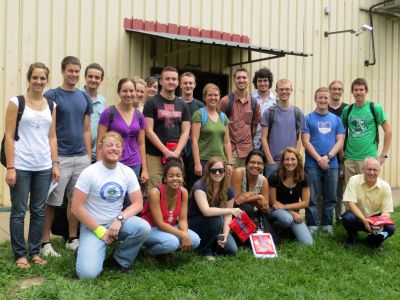 Inside the building was a vast sea of sewing machines and 600 workers (of 2,500 employed at this plant) working in well-lit, clean spaces.  Most of us had not heard of Gildan before, until we started looking at the tags on our t-shirts.  Caleb’s green GC intramural t-shirt said “Gildan, Made in Nicaragua” on the tag, as did the shirts from several others in the group.  Doug later discovered that the Goshen Diversity Day and MCC Relief Run t-shirts he brought on SST were also made right here.   Gildan makes 70% of the t-shirts sold in the U.S.

The Nicaraguans we saw making our shirts work 12-hour days for 4 days, followed by 4-days off.  Workers are paid according to how many shirts their work team makes; about 200,000 shirts get made here every day.  Later we learned that the minimum wage for maquila workers is about $140 per month.  While not all maquilas in Nicaragua are like this one, the managers at this plant explained several positive initiatives for employee benefits, such as a free health clinic, and industry awards Gildan has received for environmental policies and working conditions.

Different students commented afterwards that on one hand it was encouraging to see, in a country with high un- and under-employment, so many people being able to work at a job that provides a regular paycheck.  On the other hand, it was hard for us to fathom what it is like to do this repetitive work for 12 hours a day, 4 days in a row.  The pay, while better than what many less fortunate Nicaraguans make, is still too little to support a family.  However, don’t we have some responsibility for this when back home we always shop for the lowest-priced goods?  Although we were left with many questions and issues, the students later rated this visit, connected to the very shirts on our backs, as one of the most important learning experiences of the first six weeks.