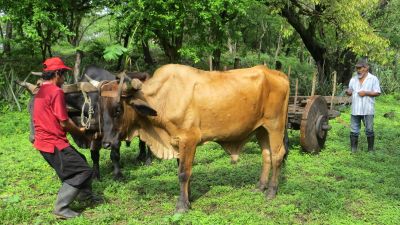 A day in the campo starts with a cup of coffee and a piece of bread as early as the eastern sky begins to get light, which is at 5 a.m.  In our different homes we watched families in their morning routines, like making tortillas and hitching up the ox cart.

At 6 a.m. we met in front of the library with two members of the community, Marcelino and his son Alcides, to hear about agriculture, the occupation that employs more than 40% of Nicaraguans, most of the them campesinos (small farmers who live in rural areas like El Lagartillo).  Corn and beans are staple crops planted soon after the six-month rainy season begins, giving time for two plantings and two harvests before the rains stop in November.  With two crops and a low population density, there shouldn’t be hunger and malnourished children in Nicaragua.  However, Marcelino and Alcides explained that it is very difficult for campesinos to get credit for planting, limiting them to harvesting small crops.  Also, a year of bad weather is often devastating, forcing a campesino to sell his land and become landless, which leaves his family less able to sustain themselves.  Organizations that offer micro-loans [like MEDA], are a great help. 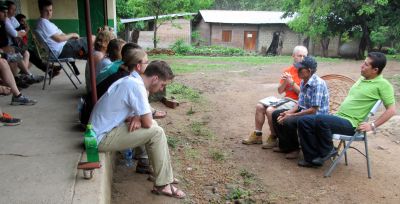 When the community was first born, as a farming cooperative in 1983 that received land from an agrarian reform program, they began doing quite well, and the size of their cattle herd grew.  After the Contra attack and the war grew more intense, they said it became harder and harder to farm because community members had to take shifts providing 24-hour guard duty, and it was dangerous to be out in the fields.  They couldn’t keep up with all the farm work, and the size of their cattle herd began dwindling.  Later some of our students, recalling that two 14-year-old boys had died defending the cooperative, noted that was about the age of some of the musicians last night; it was hard to imagine them toting guns doing guard duty.  Doug explained that was what the students would have seen had they been here during the Contra war; in farming cooperatives every male above age 14 always had, in case of attack, a gun either strapped to his back or within reach.  Even without the sound of gunfire, the war was omnipresent.

Turning to the present, we asked why their community does so well now, with its own library, cultural center, secondary school, theater group, musical group, etc.  It also offers a Spanish language school for foreigners.  A student asked how many children in the primary school go on to secondary school, and they said almost all of them did.  That made our students’ eyes open wide; earlier, while studying education in Nicaragua, we learned that nationally the advancement rate is only about 50%.  The real shocker, however, is that most of their kids are admitted to a public university after finishing secondary school, when the national acceptance rate, of 20%, is mostly from city kids.

What are they doing different in this community?  Marcelino and Alcides said part of the answer is that the community was formed around a shared purpose, which included the value of organization.  While that quality made them a target for the Contras, it also helped them survive economically.  Alcides, who because of the war could not finish high school until age 26, said they also teach their children to place a high value on education.  Those who will apply to a public university are tutored all during their summer vacation, and then the community offers them a small scholarship once they are accepted.  They said the other reason they do all these initiatives is that they owe this to the six who were killed during the Contra attack. 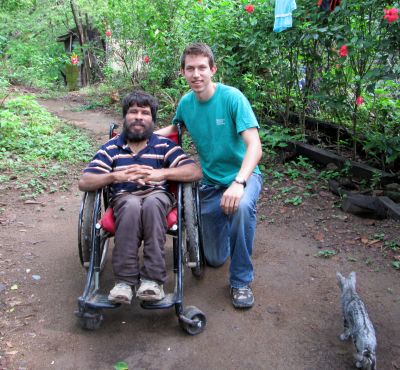 After the meeting the students returned to their homes for breakfast at 7:30 (yes, coffee at 5:00 and breakfast at 7:30 is a typical morning).  At Caleb’s home he had breakfast with Juancito, a paraplegic since birth who was adopted by the community as an infant when he was left there.  During the Contra attack 13-year-old Juancito could not flee like the others, but he was able to crawl into a bomb shelter. The Contras threw grenades into the shelter, but Juancito had dug down deep enough that he survived the blasts.

After breakfasts we loaded our vans and started our journey through the mountains for a 6-hour drive to Managua.  Alejandro will be coming back to Lagartillo, however, for his service assignment.

In Managua we met with several people from Mennonite Central Committee (MCC).  Matthew Tschetter, the Connecting Peoples Coordinator, shared the MCC philosophy of mission, and local volunteers Erick Eitzen, Marissa and Adam Shenk, and Jacob Castro explained the work they do. 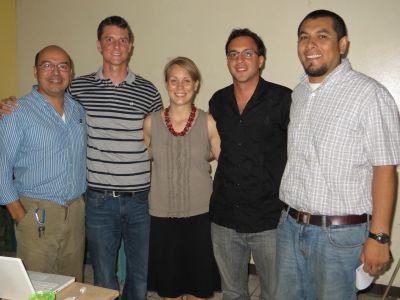 Jacob encourage the Goshen students to “hear people’s stories” while they are in Nicaragua, advice that resonated very well with what we’ve experienced so far.  Marissa, who works with a mobile library project, advised the students as they prepare to leave for service assignments soon that a good philosophy is, “Relax and keep a sense of humor, because your work may turn out to be nothing like you think.”  Her husband Adam works with the Peace and Justice Commission of Nicaraguan Anabaptist churches.  He teaches conflict resolution in schools, including work with gangs in a neighborhood where one of the churches is located.  He told the students that more patience and flexibility will be needed than what they thought, but, “relationships are more important than the work.”

A special treat for some of the students was to see Erick, a fellow GC student who is serving in Nicaragua with MCC through the SALT (Serving and Learning Together) program.  The SALT program is for young Christian adults aged 18-27 who want to do one year of service abroad from August to July, offering, “An opportunity to learn, reflect, absorb and change” in a host culture.  Erick said his motivation to so SALT came from this SST experience in Peru last year.  In Nicaragua he is doing water and sanitation work in Matagalpa, where the GC students were two days ago.

During the meeting Matthew offered two quotes about vocation and service that resonated with much the students have heard recently during lectures and on this field trip:

The place God calls you to is the place where your deep gladness and the world’s deep hunger meet.

If you’ve come to help me, you’re wasting your time. But if you’ve come because your liberation is bound with mine, then let us work together.