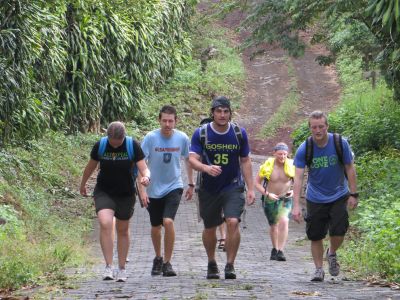 Friday was such a long day that we set a record for starting early.  Everyone arrived at Quinta Goshen (our unit house) before 6 a.m. to leave for the entrance station for the Mombacho National Park.  Mombacho is an extinct volcano with a unique cloud forest on top.  The entrance to the park is at the base of the volcano at 1,300 feet above sea level, and the top we reached is at 3,700 feet, reached by a road 3.5 miles long.  Some students wanted to walk all the way up, others wanted to walk partway and ride in a transport the rest, but everyone got rained on less than 5 minutes after starting.

On the trip up it was impressive to feel the temperature gradually get cold, and to see how the vegetation slowly transitioned from sparse to dense, and from farmland to coffee trees to dense cloud forest.  Nearing the top we could see from the mist around us that we were in the clouds. 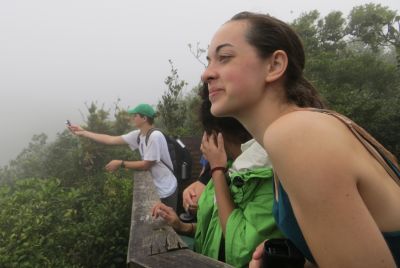 The group broke into 3 sub-groups with 3 park guides for 2.5 hours of hiking through cloud forests.  Tree limbs are laden with epiphytes: plants (like lichens, vines, ferns, bromeliads, and orchids) which grow on other plants.  Without roots in the ground they get their moisture from the frequent mists, and they get their minerals from dust that blows from the Sahara clear across the Atlantic.  One tree was documented to have 55 different epiphyte species, more than are found in an entire forest in England. In a clearing we saw fumaroles, steam vents caused by interior lava close enough to the surface to vaporize soil moisture.

Although the top of the volcano is national park land, the cash-strapped government doesn’t have funds to develop, administer or protect the park.  Instead, a private foundation provided funds to develop the trails and infrastructure, charges entrance fees, trains the park rangers, offers transportation to the top, and protects the park.

At noon, after 6+ hours of riding and hiking since breakfast, everyone was ready for a big lunch at a ranger station and lodge.  Then we rode trucks down the mountain (a mini-adventure in itself) and jumped in our vans for a quick jaunt over to Granada, the oldest continually-inhabited city in the Americas (founded in 1524). 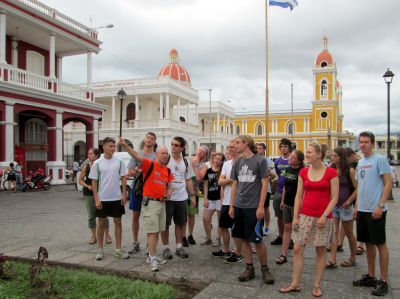 As a major trading hub with water access to the Caribbean and easy land access to the Pacific Ocean, Granada became a wealthy Spanish colony.  That attracted enemies, which resulted in the city being sacked and burned multiple times, first by pirates in the 1600’s, and later by a mercenary army led by the U.S. citizen William Walker in the mid-1800’s.

After conquering Granada, Walker staged a fraudulent election, named himself President of Nicaragua, made English the official language, reinstated slavery, invited U.S. citizens to come colonize Nicaragua so that it could eventually become a new U.S. state, and was recognized by the U.S. government as the legitimate ruler of Nicaragua.  When the other Central American countries, fearing for their own safety, sent armies to chase Walker out of Nicaragua, he ordered his soldiers to start at the outskirts of Granada and work their way toward the center, looting and burning every building, including 7 churches. The city burned for 10 days, and when the Central American armies finally reached Granada they found nothing but smoldering ruins and a sign Walker had left, reading, “Here was Granada.” Although Walker’s exploits are hardly known in the U.S., in Nicaragua it’s in every textbook on national history.

In Granada we also visited a museum featuring Nicaraguan art and pre-Columbian artifacts, and then students had free time to find a coffee shop, eat ice cream, or buy souvenirs.  In the distance we could see Mombacho rising above the city, it’s top still shrouded in clouds.