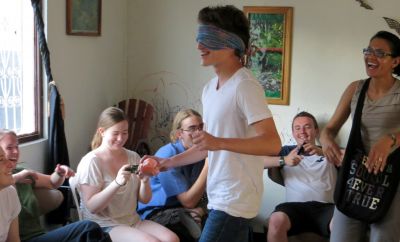 At our Monday Coyuntura it appeared that we had forgotten it was Alejandro’s birthday; there was no cake and no singing for Alejandro.  Afterwards Maria asked Alejandro for some help running errands, while the rest of us hopped on public transports to go to Alejandro’s home, where a surprise party had been planned by his family.  After an unsuspecting Alejandro arrived home and found his classmates hiding in his living room, his family led us in several party games, including put-the-nose-on-the-clown, similar to our game with a tail and a donkey.

On Tuesday we broke up into 3 groups to visit 3 area schools: the largest high school in Jinotepe, a primary school in Diriamba, and a small rural primary school in the countryside, where the students held a special assembly to welcome the Goshen students.  Later each of the three groups will share notes with each other about what they found at each school.

On Wednesday our afternoon lecture was about Nicaragua’s 1980 Literacy Crusade, which reduced illiteracy in the country from over 50% to about 13%.  Coming less than one year after the overthrow of the Somoza dictatorship, almost 100,000 Nicaraguans, most of them youth, volunteered for 5 months to teach lower income, illiterate compatriots how to read in write.  The widely-documented effort was later recognized with a prestigious award from the United Nations Education, Scientific and Cultural Organization (UNESCO).

Maria (one of the two unit leaders) was one of the youth who participated in the campaign when she was 13 years old; she spent 5 months teaching 4 people, ages 40-60, how to read and write.  The experience set her on the path to being a college professor today.

Tomorrow we leave for a four-day field trip all the way to the opposite side of the country, the Atlantic Coast.