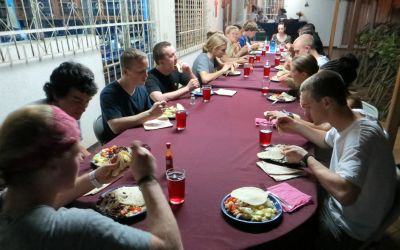 Last night for supper the students enjoyed their first Nicaraguan meal, which included a tortilla, salad, mixed vegetables, a fresco de Jamaica (hibiscus tea) and ……. rice and beans.  Everyone liked the rice and beans, which is good, because that is the Nicaraguan staple.

After breakfast this morning (which included 4 types of fruit, as well as ….. rice and beans), the students had their first Spanish classes with their teachers for the next 6 weeks.  This first class focused on “survival Spanish” for this weekend, starting tomorrow, when each student will be picked up by their host Nica family.  After 3 hours of instruction, the students still had more questions and were eager to learn more.

In the afternoon we had more orientation sessions.  In the late afternoon, after the most intense heat had passed (it was in the mid-90’s today), we went to Loma de Tiscapa, the upper rim of a volcanic crater lake where the Somoza dictatorship (1933-1979) had its palace as well as prison cells where political prisoners were tortured.  Today a park and museum mark the spot, and a tall statue of Augusto Sandino, Nicaragua’s most famous national hero, shares with visitors the best views of the capital, Managua, and the surrounding area.