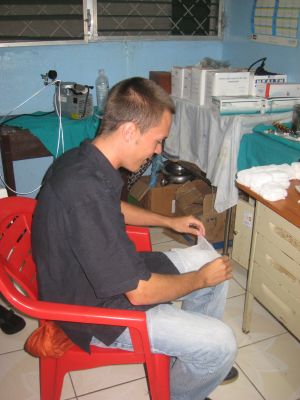 Our journey to visit Caleb and Lynelle started out early as we left on a 6:15am-ish flight to Bluefields from Managua.  After arriving in Bluefields, we took a panga (speedboat) to Pearl Lagoon and got in just before it started raining.  We met Lynelle at the hotel and started hearing her stories of life on the East Coast.  Caleb soon joined us and we went to see where Caleb is working.

Caleb is working with several doctors at the local Centro de Salud.  He has spent time with the Internal Medicine doctor, Pediatrician, Emergency room doctor, and the Obstetrics doctor.  The physicians explain the different diagnosis and how to treat them effectively.  He also got to spend a day walking around the community treating the water to prevent Malaria and Dengue.  The physicians have also shared their struggles of working at a health center with limited supplies, inadequate facilities at times, and the difficulties of transporting patients to larger health centers and hospitals.  There is one unpaved road out of Pearl Lagoon but it is a 12 hour journey to Managua.  Most patients that need more specialized treatment are taken by panga to Bluefields for treatment at their own cost.  The government provides a small amount of money for the transportation to Bluefields, so women and children under the age of 6 are given priority.  As we returned to Bluefields on our way home, we experienced someone being transferred to Bluefields at their own cost in the public panga.  Caleb has also been taught how to fold gauze and the next morning when we visited him he was busy folding gauze.  All gauze is hand-folded and then sterilized, since pre-packaged gauze is not available.

The steady rain that we experienced during nearly our entire stay affected school attendance at the school where Lynelle is working. Out of her 27 1st graders, she had 3 students in her classroom the morning we visited.  We were able to see Lynelle working one-on-one with the students, as the majority of her class doesn’t come when the weather is rainy.  The 2nd grade teacher had no students that day so she was in the 1st grade classroom.  Lynelle is working at the bilingual school, Beulahlightbur Primary school.  Her students speak Creole, English, and/or Spanish.  Some students speak only Spanish and others speak Creole and English.  Class is taught mostly in English/Creole but with the goal of teaching part of it in Spanish every day.  Several students have had a hard time understanding Lynelle’s North American English accent so she has been learning some Creole and pronouncing her words like the locals.  The day we visited, there was a little boy who has been in the class for approximately two weeks.  He spoke only Spanish and was struggling with writing numbers, so Lynelle was working with him on numbers in Spanish and English.   While walking through town with her that afternoon, she was greeted by several of her students.  As with many of the education students, Lynelle has noted the difference between the value of education in the United States and in Nicaragua. 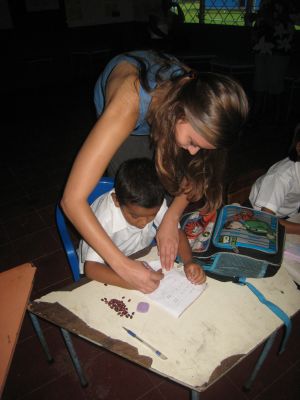 Caleb lives with a large family that is originally from Pearl Lagoon and own a local store.  There are extended family members in his house and people to talk with.  Lynelle lives a few houses down with a Spanish-only speaking family that is originally from Bluefields.  Her house is a little quieter with only three small children.  They are both enjoying their host families and the daily interaction with them.

Caleb and Lynelle have had the opportunity to experience another culture here in Nicaragua.  There is a very distinct difference between the Latino culture on the Pacific coast and the Caribbean feel of the Atlantic coast.