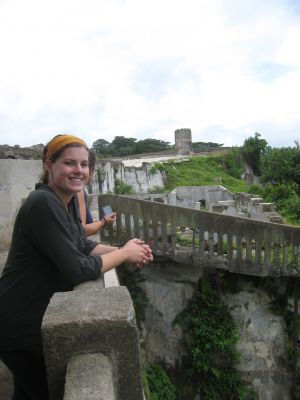 Kelsey lives in the small rural community of Santa Julia outside of El Crucero.  El Crucero is only about a 30 minute bus ride from Jinotepe but then the 6 km down a bumpy, muddy road takes another 30 minutes in a pick up truck.  Kelsey has walked the road a few times and agrees that it’s easier to go down then up the road if you have to walk.   Santa Julia is named after Anastasio Somoza Garcia’s (Nicaraguan dictator from 1936-1956) mother, and evidence of Somoza is still in the community.  The children in the community have invited Kelsey to play soccer with them on the ‘patio’ which is the coffee drying area of Somoza’s former mansion.  The mansion was built by the Germans in the late 1800’s and then became one of Somoza’s haciendas.  After the revolution in 1979, the Sandinitas redistributed Somoza’s land and the people in the community of Santa Julia finally owned the land they lived on.

There are several strong women in the community that have brought a lot of change and improvements.  Kelsey’s host mother, Lola, is one of these women.  She started organizing the community and teaching about domestic violence after she personally experienced it.  Kelsey shared with us how the men in the community help with the chores around the house and work is divided more fairly between the men and women.   Lola and the current president of the women’s co-op told us about their personal struggles, especially their lack of education.  They wanted to be able to receive an education so they went to the government and private donors and were able to build a school for the children as well as have classrooms that they use in the evenings.  The women also plant tomatoes, cucumbers, beans, etc. and sell their produce at a stand along the Pan American highway.  Kelsey has been able to help with some of the planting and is going to miss the tomato harvest by about a week.  Kelsey has learned to go with the flow as her mother is busy with several different boards and meetings and she never knows if she will be in Santa Julia, El Crucero, or Managua for meetings.

The day before we visited, Lola and the co-op president met with the Japanese embassy and were able to secure funds to build 6 km of paved road into the community.  That project will start in January.

Kelsey counted up the number of ‘jobs’ her host mother does and has reached 17 but believes there are a lot more.  While walking around the community, we were able to see how much the community has enjoyed having Kelsey there.  Children greeted Kelsey everywhere we went and wanted to make sure she was coming back as she accompanied us back to El Crucero.