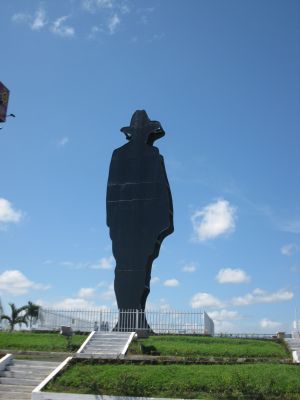 We ended our four day field trip with 1½ days in Managua.  Our first stop was Barrio Grenada, a lower class barrio where Companeros, Inc (the company that our in-country assistant Dalena works for) has been focusing their work for the last two years.  We heard from community leaders about the projects they have completed over the last several years, including a security wall for the school, murals, and potable water.   Their project this summer is working to complete a sewer project in a newer part of the barrio (The Annexo), which has required many hours of manual labor. We walked around the community to see some of these various projects, including the primary school where one of our students is currently placed for service.  We shared a traditional Nicaraguan lunch with the community leaders in the community center before loading the bus.

We settled into Quinta Shalom for several hours of rest and relaxation, then loaded the bus again to head to Esperanza en Accion and Batahola Norte Cultural Center.  Esperanza en Accion is a fair trade organization and store working to provide hope through empowerment.  They are committed to purchasing directly from underdeveloped artists and to pay a fair price for their work, thus providing them with sufficient funds to sustain their families and provide for basic needs.  Esperanza works in 14 communities throughout Nicaragua, with 225 individual artisans that are organized into 25 different artisan groups.  The director explained more about their work, then we enjoyed purchasing some of the artisan’s products, including jewelry, pottery, bags, coin purses, and more.

Our next stop was just around the corner at the Batahola Norte Cultural Center.  Andrea Kraybill, a 2011 Goshen College grad, is doing a 2 year voluntary service term here, and we enjoyed connecting with her.  Two students in the center’s scholarship program gave us a tour of the murals that are painted throughout the center.  These murals show religious scenes, tell about some of the programs that the center is involved in, and also show scenes from the history of Nicaragua.   After the mural tour we stayed to participate in Mass, which the cultural center has every Sunday evening at 6pm.  The students found this very interesting and meaningful, especially so soon after our lecture about religion in Nicaragua and liberation theology.

The next morning we continued our tour of Managua by driving through some of the upper class neighborhoods, a sharp contrast to some of the communities we had seen the day before.  We also went to Tiscapa, one of the highest points in Managua, which has good views of the city and Lake Managua, but is also the former site of (former dictator) Somoza’s mansion and jail.  One of the main attractions at Tiscapa now is a silhouette statue of Augusto Cesar Sandino, an opponent of Somoza’s until he was assassinated in 1934.

We then drove across town to the Morazán Mennonite Church, where we met with most of the Mennonite Central Committee workers in Nicaragua.  The workers explained how MCC became involved in Nicaragua after the 1972 earthquake, and the programs they are giving support to today.  This includes a mobile library, working with Nicaraguan Mennonite churches on peacemaking theology training, supporting an organization working on sustainable technology (solar panels, dry latrines), and working in an school for deaf children.  We enjoyed hearing about the work they are doing, and in some cases playing the “Mennonite game,” which involves making family, college or community connections.  The students also enjoyed interacting with the workers over a traditional Nicaraguan meal of a rice and chicken dish, cabbage salad, potato salad, and gaseosas.

The last stop of the day was at the Jubilee House Community, which is a ministry of the Center for Development in Central America.  Jubilee House has been working with the poor in Ciudad Sandino, a community outside Managua, since 1994.  Ciudad Sandino is basically a permanent refugee camp.  In 1998 the government relocated 12,000 adults and children into the area as a response to flooding from Hurricane Mitch.  The community now has the highest population density in the country, but few job opportunities.  A free trade zone factory that was built on the edge of the community was open for less than a year and now sits empty.  Jubilee House is working with the people on many projects, including an agricultural cooperative producing organic cotton and sesame seeds, a cattle feed mill using byproducts from the agricultural cooperative, paving stone production , and a security collective.  They also have the only operating cotton gin in the country, and are working on putting a spinning plant into operation, with the goal of ultimately creating the first fair trade cotton production chain – a certified fair trade clothing line from crop to consumer.  Jubilee House also runs a health center in Ciudad Sandino which is the only health care option available to residents.  They provide all types of care, including dental and maternity, as funding allows.

Our tour now complete, we loaded the bus for the trip back to Carazo.