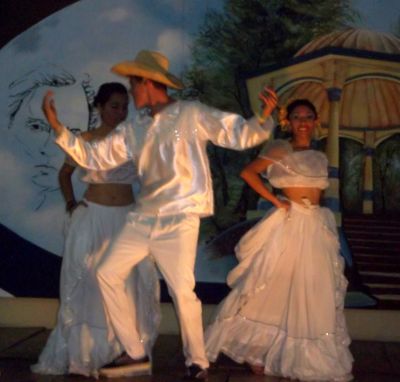 Thursday was our last full day in Carazo. After finishing Spanish final exams that morning, most of the students spent the afternoon relaxing and preparing for the evening’s despedida, or farewell ceremony.

Emceed by Kaleb and Brian, the evening got off to a lively start with a folk dance troupe from the Universidad de Central Nicaragua, where we have held most of our afternoon lectures. Then each of the three Spanish classes took the stage. Doña Mirna’s advanced class (Kaleb and Jacy) tore up the floor with a salsa dance. Don Rene’s class sang a lovely a cappella version of the ever-popular “Ay Nicaragua, Nicaragüita.” The big hit of the evening was Don Ramón’s class performing an original drama entitled “El Machete de Oro,” (the golden machete). Narrated masterfully (in Spanish) by Jacob, “El Machete de Oro” featured action, romance and even a sneaky devil in a convoluted plot that included not-so-veiled references to both SST leaders and drew lots of laughs.

We got a special treat from two local guitarists, who performed “La Mora Limpia,” an instrumental piece which is sometimes referred to as “Nicaragua’s Second National Anthem.” Composed by Camilo Zapata, this piece is an example of his distinctive son Nica, a type of music that mimics marimba rhythms and Nicaraguan speech patterns. The UCN dance troupe also performed an excerpt from El Güegüense, an anonymously-penned satirical dance that dramatizes the clash between the indigenous Nahuatl of Nicaragua and the conquering Spaniards.

Other music offerings included Dalena singing two songs by the Nicaraguan Duo Guardabarranco and Nathaniel performing an original song and accompanying himself on guitar. (We can now add talented musician to his unofficial title of funniest journal writer.)

At the end of the evening we thanked all of the wonderful people who have helped us these past six weeks: the great staff of UCN, Compañeros, our three Spanish teachers, household helper Connie, “angel” and taxi driver Don José, country coordinator extraordinaire Dalena, and of course the host families who have welcomed these students into their homes as sons, daughters, brothers, sisters and grandchildren. The SST program would not be possible without the support, assistance and hospitality of all of these generous people, and for this we are very, very grateful.

We closed the celebration with an entertaining slide show of the first six weeks and two of our favorite a cappella songs: “Come Thou Fount of Every Blessing” and of course, “Praise God From Whom All Blessings Flow” (606 in the old red Mennonite hymnal).

Thus ends the Carazo chapter of this year’s Nicaragua SST. We’re ready to begin the second half of the semester as we head off to new sites, cities and families for our service assignments.