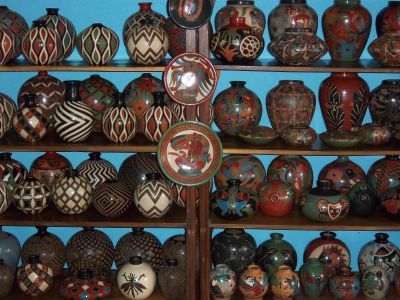 Our final day trip as a group was last Friday, when we visited an active volcano in nearby Masaya, a lookout point over Laguna de Apoyo, and a village of artisans specializing in ceramics. We had two special guests along with us — next year’s Nicaragua SST leaders Deanna and Tamara, who are here for a week of orientation.

Volcán Masaya last erupted in 1772 but continues to emit a nearly constant stream of sulfurous gas and smoke. When the breeze is strong, the fumes can be hard on anyone standing downwind. After learning about the geology and wildlife of the area in the museum at the base of the volcano, we were advised by park rangers to keep our exposure to a minimum by staying on the mountain for a short time only and keeping our mouths and noses covered. Consequently we had to nix our plans to hike around the rim of the crater. We had hoped also to explore a cave where lots of bats hang out (literally), but a recent rain storm had made the path too treacherous, so that didn’t work out either. However, we did get to climb what seemed like hundreds of steps up to a cross at the lip of the volcano. In the early 1500s a priest placed the cross there in order to protect the villages below and exorcise the devil from what the Spaniards called “the mouth of hell.”

While we didn’t see any signs of the devil in the volcano, our lungs were ready for a break by the time we got back down the steps, so we headed to our next destination, the artisans’ mercado in the city of Masaya. There we spent several hours perusing the many crafts at the market and buying gifts for host families and souvenirs for friends and family back in the U.S.

Lunch was at the Mirador de Catarina, a popular cluster of restaurants and shops on a cliff overlooking the beautiful Laguna de Apoyo, another local geological formation with volcanic connections. This lake formed in the crater of a long-extinct volcano, and at its deepest (200 meters) it is the lowest point in all of Central America. Several of our students will have their service placements at a biological research station nestled in the densely-forested slopes leading down into the crater, so we’re sure you’ll be hearing more about the laguna in the coming weeks. For now though, the view was spectacular, the food tasty, and the roving band of musicians a nice accompaniment to the meal.

Our last stop of the day was San Juan del Oriente, a community made up almost entirely of people involved in the creation and sale of ceramic pottery in one way or another. We visited the home of Don Juan Paulino, where his wife gave us a step-by-step demonstration of the ceramic-making process and answered our many questions about materials, designs, traditions and more. This family enterprise involves three generations and is a fairly typical way of life in San Juan del Oriente.

We learned also that Don Paulino has worked for many years with Potters for Peace, an organization that began in Nicaragua during the contra war of the 1980s with the goal of helping artisans and others find fair and sustainable solutions to poverty. Potters for Peace continues to function in Nicaragua and several other Latin American countries today.

Of course, we also had some time to shop in the store at the front of Don Paulino’s house before leaving. We loved the variety and quality of these hand-made works, not to mention prices considerably lower than one could expect to find in the United States.

We ended the day tired, maybe a bit shopped out, and looking ahead to our last few days together as a group in Carazo. This week we’re wrapping up Spanish classes, attending our last lecture, getting ready for our service assignments, and saying goodbye to our local host families. We’ll be sure to keep you posted as we head into the second phase of the SST experience.

P.S. On Sunday a bunch of us ventured out to the aforementioned Laguna de Apoyo for an afternoon of splashing around in what has been called the best swimming hole in the country. We’ve included a few photos from that excursion as well.