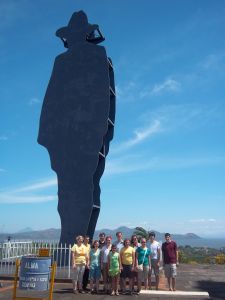 Sunday morning we headed from Managua to Jinotepe, stopping for a few minutes at Loma de Tiscapa on our way out of the capital city. This hilltop was where former dictator Anastasio Somoza built his presidential bunker, and ruins of his palace are still visible. Also atop the hill is a 59-foot tall silhouette statue of Augusto César Sandino, who was last seen alive here before being assassinated during peace talks with Somoza. The hill affords a panoramic view of the city, Lake Managua, and Volcano Momotombo in the distance.

The group arrived in Jinotepe late in the morning and immediately went off to explore the city in three small groups, each with maps and directions to make their way to four key locations by noon. After lunch we all squeezed into a public microbus (van) and went to nearby Diriamba and back, passing through Dolores on the way, so that we covered all three towns in the department of Carazo where students’ host families live. After several hours of free time to visit cyber cafes, exchange money, rest and relax (and maybe even find ice cream),  students prepared to meet the families they will be living with for the next six weeks.

Like a couple of proud-yet-wistful moms, the two of us watched as the students met and went home with their “new” families. By 6:00 p.m. we were feeling like a couple of empty-nesters.