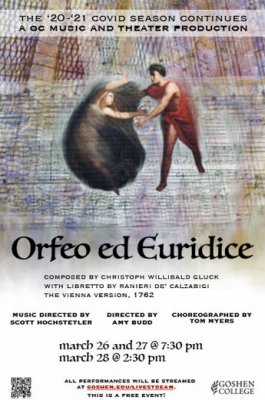 First performed in 1762, Glück’s Orfeo ed Euridice is based on the myth of Orpheus, who, bereft by the death of his wife, Eurydice, just after their wedding, entreats the gods to restore her to him. Won over by Orpheus’ playing of beautiful, sad music, the gods send an emissary, Amore, to set a challenge for Orpheus: travel into the underworld and bring Eurydice back to the surface to restore her to life. There are two conditions: Orpheus cannot look at her along the journey, and he must never complain about the first condition. Although the original myth depicts that Orpheus’ resolve fails at the last moment, all is not lost for Orpheus and Eurydice in Glück’s opera.

“Glück’s plot-twisting adaptation of the Orpheus and Euridyce myth celebrates the power of mercy,” said Amy Budd, director and assistant professor of theater. “It shows us a world where loving actions need not be perfect to succeed. It’s the perfect way to usher in the spring. It takes us all the way to Hades and back again. We return renewed to lift up one another in love and community.