From Sunday comics to Pulitzer Prize winning novels, the graphic novel is a genre that many are familiar with but few study in depth. Jessica Baldanzi, professor of English, has spent the last decade studying and teaching this discipline to students at Goshen College, while also delving into research projects surrounding the topic. 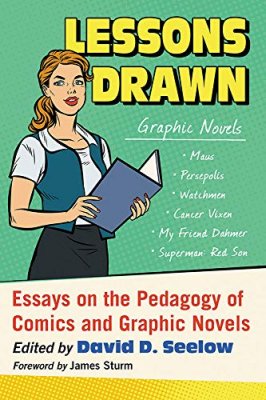 Baldanzi recently had an essay featured in the collection “Lessons Drawn: Essays on the Pedagogy of Comics and Graphic Novels,” which was published in May. Her essay, titled “Beyond Hair Bows and Cleavage: Helping Women Draw Their Iconic Selves,” discusses a problem Baldanzi noticed through teaching a graphic novel class.

The course, which debuted May term 2008, gives students the opportunity to explore numerous aspects of comics and graphic novels. Students read a variety of long and short graphic novels, and work to create iconographic versions of themselves. Each term, students complete a final project in which they create a graphic memoir about themselves or a family member.

“I noticed specifically women were having issues with drawing representations of themselves,” said Baldanzi. “Whenever they needed to draw themselves as themselves, women specifically got a little uncomfortable. Everybody gets uncomfortable in some way, but for women they really struggled to find an iconic way to represent themselves. Because so often it’s either a hairbow, or this stereotype of an oversexualized female body.”

Baldanzi contacted current and former Goshen College students who had taken her Graphic Novel course and sent them a survey asking them to reflect on aspects of gender identity as it related to their experience with the course and its content. Eleven women responded, many of whom are quoted within the article. All of them pointed at some level to the challenge of representing themselves in their work.

Alexandria Ganger, a 2016 graduate, said, “I drew myself as a bear, just to experiment a little. I remember scratching my head a little trying to find a way to identify myself as a lady bear without jumping into stereotypes or using identifiers that didn’t match me.”

The other women echoed her sentiments, and Baldanzi was able to use their quotes, along with samples of their work, to illustrate the challenges women have in drawing themselves.

“Traditionally, the way women have been depicted in comics is oversexualized,” said Baldanzi. “So when I ask the women in my class to represent themselves, a lot of them are like ‘do I draw cleavage? Do I do the hair bow, even though I never wear hair bows? Do I draw eyelashes? How do I get myself across as female, or do I even need to get myself across as feminine?’ How do you encourage women to represent themselves in a positive manner?”

In the essay, Baldanzi writes that the women in her class not only rise to the challenge, but “consistently discover unique paths to their best selves.”

“It gave me some great suggestions on how to negotiate this class with women in the future, and how important it is for women to feel comfortable in this class and to come up with iconography that they don’t feel constricts them,” said Baldanzi. 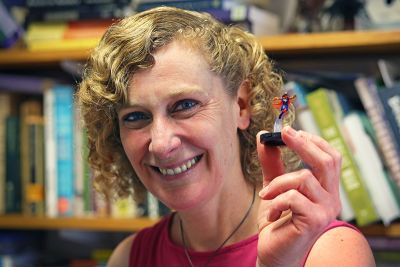 While this essay focuses on the actual teaching practices of the discipline, Baldanzi plans to pursue the topic further in a formalized research project following her work as co-editor on an upcoming collection of scholarly essays covering the new Ms. Marvel, Kamala Khan.

Baldanzi’s upcoming book, titled “Ms. Marvel’s America: No Normal,” is set to be published in 2020 and includes essays that both praise and critique the new character.

“She’s kind of like a cross between Spiderman and Buffy the Vampire Slayer,” said Baldanzi.

“G. Willow Wilson was the perfect person to do this for them,” said Baldanzi. “You can’t always take a writer and stick them in the comics world. G. Willow Wilson knew comics, and knew how to write them and how to do those characters. That’s one thing that made it really successful.”

While she has appreciated the experience on this collection, Baldanzi noted that the process has made her excited to tackle a new passion project, doing in-depth research on comics and the female body.

She says that she worked with wonderful colleagues on the collection, but “trying to wrangle all these academics was like wrangling cats,” and she’s already begun writing a book manuscript of her own.