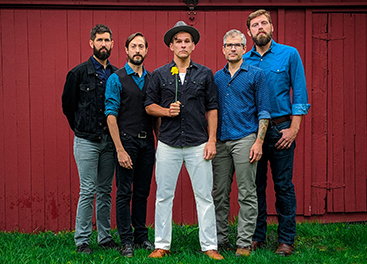 The Steel Wheels, an Americana band with Mennonite roots, will return to Goshen on Friday, May 10, at 7:30 p.m., to perform in Goshen College Umble Center. This concert is sponsored by Goshen College’s Music Center and the college’s radio station, 91.1 FM The Globe (WGCS).

Hailing from the Blue Ridge Mountains of Virginia, The Steel Wheels are familiar with the traditions of folk music and how a string band is supposed to sound. They’ve been drawing on those steadfast traditions for more than a decade. Yet, their name also evokes a sense of forward motion, which is clearly reflected in their most recent album, “Wild As We Came Here.”

Their musical style weaves through Americana and bluegrass, folk and old-time music, and the acoustic poetry of the finest singer-songwriters. By incorporating percussion and keyboards into their recording sessions for the first time, “Wild As We Came Here” adds new textures to their catalog, as themes of discovery and perseverance run throughout the collection.

The five band members – Trent Wagler (guitar, banjo), Eric Brubaker (fiddle), Brian Dickel (upright bass) and Jay Lapp (mandolin), started their journey together in 2004. Wagler, Dickel and Brubaker studied at Eastern Mennonite University in Harrisonburg, Virginia. All four members of the band grew up in Mennonite families. Wagler and Dickel were in a punk/alternative band until acoustic music lured them in. Drummer Kevin Garcia later joined the group, providing a richer percussion experience.

Wagler soon started crafting songs and learned flat-picking. Dickel took classes on building guitars. They briefly played as a duo before Brubaker joined on fiddle. Lapp eventually came on board after getting to know the band from the local folk circuit. In 2010, following a variety of EPs and LPs, the ensemble officially branded itself as The Steel Wheels, a tip of the hat to steam-powered trains, industrial progress, and the buggies of their Mennonite lineage.

Tickets for this concert are $25 general admission, and are available online at goshen.edu/tickets or at the Goshen College Box Office (boxoffice@goshen.edu, 574.535.7566).