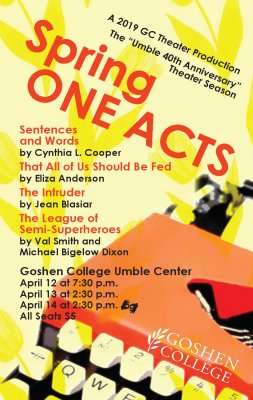 The Goshen College Theater Department will perform four one act plays, on Friday, April 12 at 7:30 p.m., and Saturday and Sunday, April 13 & 14 at 2:30 p.m. (ASL interpreted) in Goshen College’s Umble Center.

The one acts include “That All of Us Should Be Fed” by Eliza Anderson, “The League of Semi-Superheroes” by Valerie Smith and Michael Bigelow Dixon, “The Intruder” by Jean Blasiar and “Sentences and Words” by Cynthia L. Cooper

“That All of Us Should Be Fed” is directed by Violet Smucker, a junior theater major from Goshen. The cast includes Laura Miller, a sophomore Spanish and writing major from Arlington, Kansas, and Kailey Rice, a sophomore sign language interpreting and music major from Frisco, Texas. Madeline Smith Kauffman, a sophomore social work major from Walnut Creek, Ohio, is the stage manager.

“Sentences and Words” is directed by Abigail Greaser, a junior music and theater major from Goshen. The cast includes Rachael Klink, a senior history and peace, justice and conflict studies major from Chambersburg, Pennsylvania, and Cara Wilson, a sophomore theater and film production major from Indianapolis. Ben Meyer Reimer, a senior theater and music major from Goshen, is the stage manager.

Tickets for the show cost $5, and are available through the Goshen College Box Office (574.535.7566, boxoffice@goshen.edu), online at goshen.edu/tickets or at the Umble Center Box Office an hour before the show.