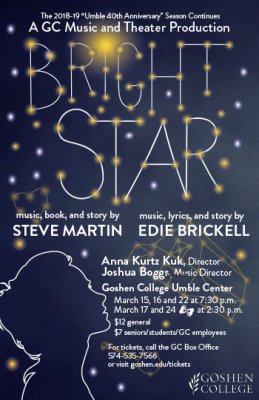 Bright Star is an uplifting musical journey featuring the Grammy-nominated Americana score by Steve Martin and Edie Brickell. Set in the Blue Ridge Mountains of North Carolina, 1940s literary editor Alice Murphy shares her story of loss, love and hope. After a chance encounter with a young, aspiring author just home from World War II, she relives the harrowing journey that helped shape her. As the action travels between the 1920s and ’40s, Alice works to understand her past. What she discovers has the power to transform both her life and that of the young author.

“We are pleased to be among the first to produce the musical Bright Star in the Midwest region following it’s 2016 Broadway run and subsequent national tour,” said Doug Liechty-Caskey, producer and professor of theater. “This likely means that few are familiar with this musical or its infectious Americana-style tunes co-written by Martin and Brickell. This is not your typical, run-of-the-mill musical, and the heart-warming story told from the perspective of literary editor Alice Murphy won’t disappoint.”

Based on real events and inspired by Martin and Brickell’s 2013 album “Love Has Come for You,” Bright Star has been nominated for five Tony Awards, five Drama Desk Awards and a Grammy Award.

“At the heart of this story is the music; the bluegrass, Americana score which makes the telling of this story flow, the poetry of the characters’ experiences resonate from the stage,” said Anna Kuk Kurtz, director and assistant professor of theater. “In a time in our world when we need it most, this is a musical that leaves us feeling that hope is not lost; that we are never alone.”

Tickets are $12 general admission, $7 students/seniors/GC employees, and are available online at goshen.edu/tickets, by calling at 574-535-7566, or at the door one hour before the show. Running time is two-and-a-half hours, including an intermission.

Bright Star is the third production in the GC Theater Department’s “40th Anniversary Season” featuring the work of female playwrights and composers.