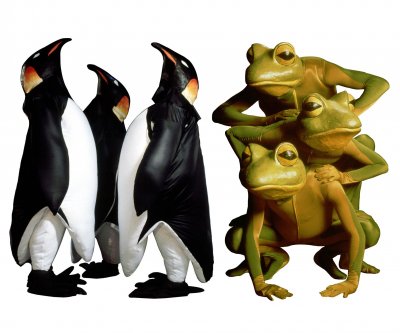 Portland-based Imago Theatre will bring their signature show FROGZ! to Goshen’s Umble Center for two performances Friday and Saturday, Feb. 1 & 2, at 7:30 p.m. in the Goshen College Umble Center as part of the college’s Performing Arts Series.

FROGZ! combines mime, dance, original music and special effects to create a menagerie like no other­ — frogs, lizards, windbags, cowboys, sloths and penguins fill the stage with wit, wonder and mesmerizing Felliniesque mayhem.

Instead of a narrative storyline, FROGZ uses five dancers dressed as animals to portray human emotions. The universal, nonverbal and lighthearted content means it resonates well with kids and adults around the world. New York Daily News writes, “A cross between a circus, vaudeville, and the zoo. . . . One of the wildest, weirdest, wackiest shows ever to play NYC.”

Dating back to 1979, Carol Triffle and Jerry Mouawad began creating masks and costumes and developing movement to bring the essence of their creatures to life. Since then, the show has been an international success on television and European, Asian and North American tours – including twice on Broadway.

The show is well-suited for families and is recommended for ages 3 and up. “. . . It is hard to name a show better suited to introduce kids to the imaginative power of theater” according to National Public Radio.