GC ranked second among the “Top 100 National Baccalaureate Colleges” by Washington Monthly magazine and 9th among “Best Regional Colleges in the Midwest” by U.S. News. 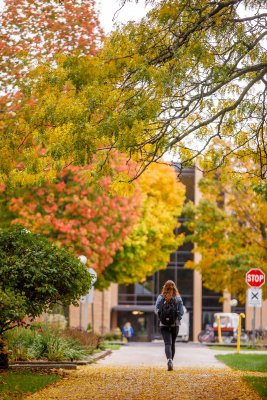 Goshen College remains among the top ten schools on the U.S. News & World Report list of the Best Regional Colleges in the Midwest, according to their annual rankings released today.

“I am pleased that Goshen College has been recognized once again for our quality and affordability,” Goshen College President Rebecca Stoltzfus said. “These rankings highlight several strengths that combine to make us distinctively Goshen: excellence in teaching, global learning on and off campus, diversity and support for students with a range of academic backgrounds.”

The ranking places Goshen College as the top baccalaureate college in Indiana, ahead of Taylor University (42), Huntington University (90), Indiana University-Kokomo (101) and Manchester College (147).

On the U.S. News & World Report ranking, Goshen College also placed among the top ten on the list of “Best Value Schools” among Midwest regional colleges and, at number six, is the top college on that list from Indiana. GC is also in the top ten in this group for the least amount of debt for graduates.

“These rankings highlight several strengths that combine to make us distinctively Goshen: excellence in teaching, global learning on and off campus, diversity and support for students with a range of academic backgrounds.”

Goshen College again made the national list of Best Study Abroad programs in the country, was eighth on the Midwest regional list for most international students and 12th for campus ethnic diversity.

In other top ten rankings, Goshen College is eighth in its category for the largest proportions of international undergrads, and is also listed on “A+ Schools for B Students.”

Regional colleges are defined as colleges that focus on undergraduate education but grant fewer than half their degrees in liberal arts disciplines.

U.S. News groups colleges into categories based on the Carnegie Classification of Institutions of Higher Education, the most widely accepted classification system in U.S. higher education. In February 2016, Carnegie released official updates, and as a result, for the 2017 Best Colleges about 12 percent of ranked schools have moved into different categories, including Goshen College. The print edition of the “Best Colleges 2019” guidebook will be on newsstands on Oct. 16.

Washington Monthly gave high marks to Goshen College in several areas, including listing GC third for students who go on to earn a Ph.D., seventh for students who participate in the Peace Corps and eighth for its graduation rate. Other areas in which the college excelled are in its graduate performance and loan repayment rates.

The Carnegie Classification of Institutions of Higher Education defines a baccalaureate college as institutions where “bachelor’s degrees accounted for at least 10 percent of all undergraduate degrees and they awarded fewer than 50 master’s degrees.”

Goshen College was also listed as 27th of the top 100 “Best Bang for the Buck” colleges among all Midwest colleges, again receiving recognition for graduation rate, graduate performance and repayment rank.

See the full rankings at www.WashingtonMonthly.com/college_guide/