Goshen College’s Inside-Out Exchange Program has quickly become known for the deep and powerful connections that are made between inside and outside students and has become one of the most popular May term opportunities at the college. The class recently completed its fourth year, providing an opportunity for Goshen College students to study at the Elkhart County Correctional Center alongside “inside” students from the jail during May term.

For three weeks, three hours each morning, inside and outside students sat side-by-side and discussed ideas of restorative justice, violence and nonviolence, the criminal justice system and the role of race, gender, class and their own experiences. The class is taught by Carolyn Schrock-Shenk, associate professor of peace, justice and conflict studies; and Glenn Gilbert, campus utilities manager.

Titled “Justice in Our Lives,” the class is modeled after Temple University’s Inside-Out Prison Exchange Program, which was founded in 1997 at Philadelphia’s Graterford Prison and has since spread to more than 100 higher education and correctional partnerships in the United States and around the world.

Why did you decide to take this class?

Keshia: I was done after this semester but I thought ‘I kinda want to stay around Goshen and take another class.’ But if I was going to take another class, it had to have been Inside-Out. I was interested in it because I had just got done reading “The New Jim Crow” and “Just Mercy,” so I was really interested in the criminal justice system, and I felt like this was a really cool opportunity to really dive in and get to know more about it.

Alexa: I kind of had similar views as Keshia － I also didn’t need to take another class, but this one seemed really interesting and I always heard a lot of classmates say ‘you need to take it, it’s’ something you need to do when you finish.’ I also took it because I’ve had family members in jail and prison － in that jail specifically, actually － so I was really interested to see what it’s like, what it was like for my family members to be there and to get to know the people there.

Zach: I didn’t have to take the class but I’ve heard lots of stories of people saying it’s one of the best classes they’ve taken, and I wanted to learn more about the criminal justice system from an inside perspective. I hope to continue this after college, so I felt like this was a really good springboard to learn about it and take that into whatever I do next. 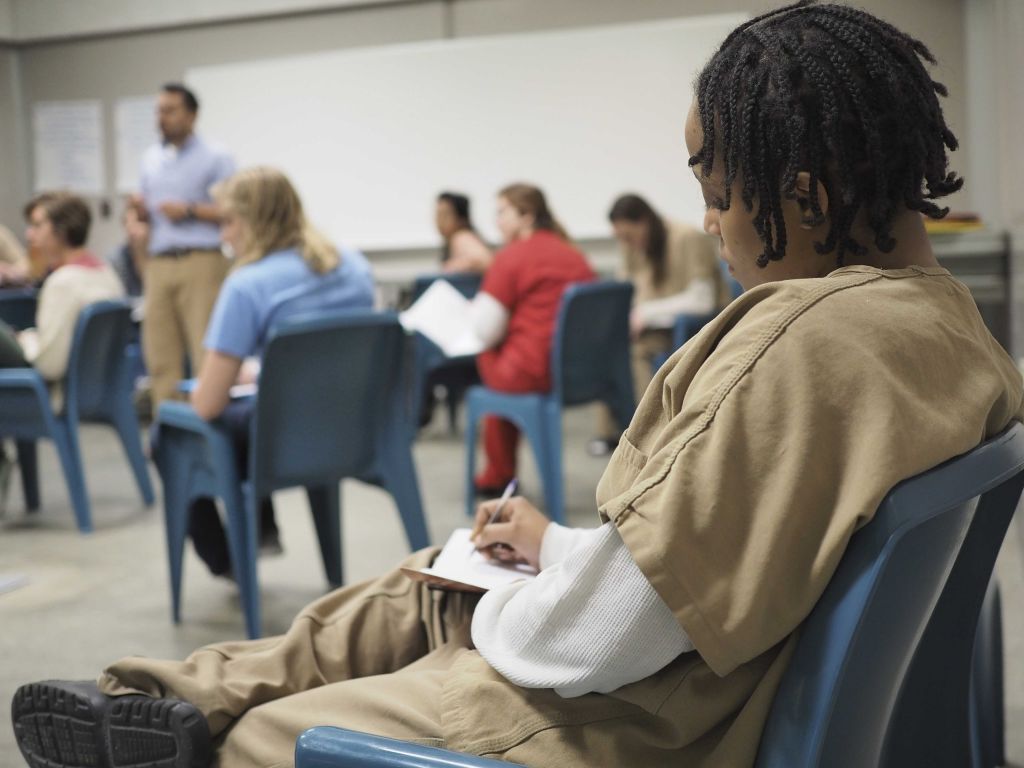 What expectations did you have going into this class?

Keshia: For me, I just really wanted to learn about the the criminal justice system, that was really my only expectation. I left with so much more than I would have ever even imagined. The relationships you build, and just realizing that they’re humans, that’s all. I didn’t really have expectations about building relationships, but I’m glad I was able to do that.

Zach: I would say that despite hearing all these good things, I really tried to keep my expectations not too high, but any expectations that I had were exceeded. Like Keshia said, I ended up with friends from the class while learning about the the criminal justice system. And just learning about the different ways in which we all view violence and the breadth of perspectives and knowledge and life experience that people have, was something I wasn’t expecting. Someone mentioned that they had an expectation that all of the people on the inside are pretty similar, but that’s not true at all.

Alexa: I actually went into it for the relationships, because I feel like when people are oppressed, and you want to make changes, you can’t go into it without hearing what the oppressed person has to say, because a lot of problematic things can come from that. So I definitely got a lot of ideas of ways things can be better.

Has this class affected how you think about your career path?

Zach: I don’t know if it’s affected my career path, but it certainly has solidified that in some way, shape or form I’m going to try and be involved with criminal justice reform. Whether that’s just simply volunteering in an anti-recidivism program, or giving people car rides to and from jail when they’re released. I think that’s part of how change occurs, that it just becomes part of people’s lives, it’s what they do. It’s not necessarily a specific job, it’s just another aspect of their everyday life.

Alexa: I did my internship at Oaklawn and I worked with younger kids and I heard a lot of my inside classmates say ‘I wish I knew this ten years ago’ or ‘if I had known this, I would have done something different,’ and I think that solidified that I should focus on youth and especially young men of color.

Keshia: For me, when I hear about people being oppressed, I always feel this calling to do something about it. So one of the questions I had after taking the class is ‘so what do I do next, so how do I dismantle the system.’ So it’s definitely made me think more about what I want to do, definitely helping the oppressed in some way. 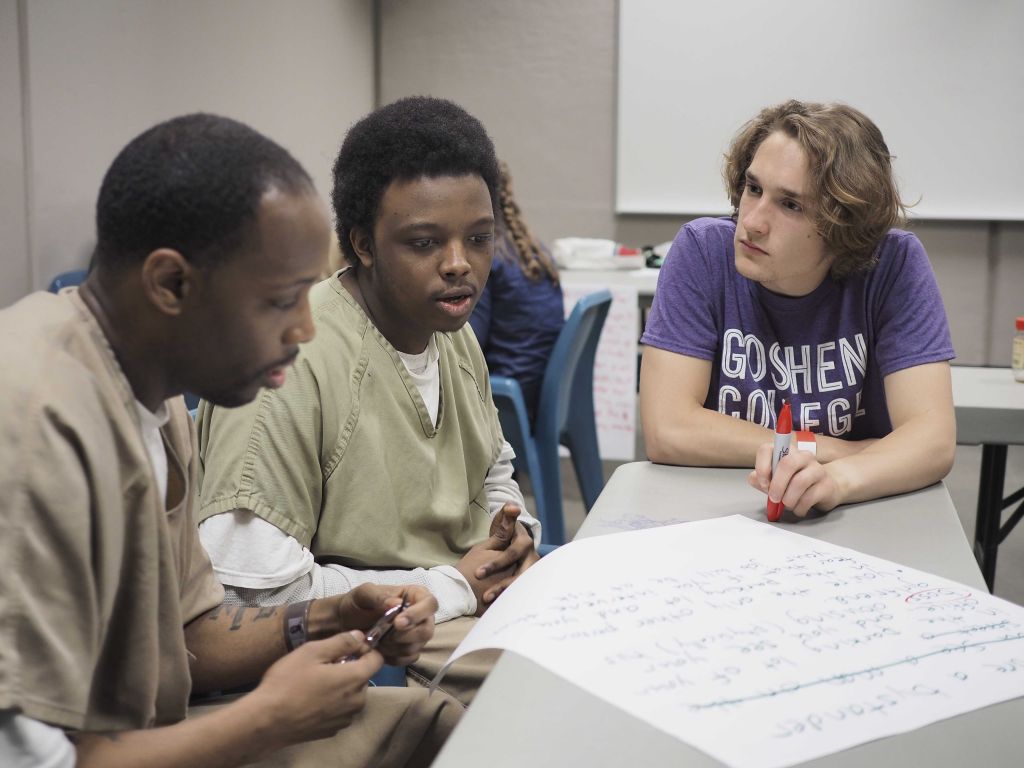 What is one thing you’ve learned about yourself from this class?

Keshia: Relationships are so important to me. On our last day of class, I couldn’t hold it in, I just started bawling, because I had just built relationships with these people for the last three weeks, and it’s cut off and I don’t know what they’re going to do next, how their story’s going to end.

Alexa: I think for me, realizing how close I can get to people that I have never met before, and it feels like I’ve known them for a really long time, but I’ve only known them for three weeks and then I don’t know what’s going to happen with them afterwards. And that anxiety, and knowing that they have a lot of this self-agency, but also that there’s a lot of things going against them, and knowing that it’s not going to be a happy ending for everyone, is hard to think about.

Zach: I would tack onto what they said; the speed and quickness that these relationships developed, they’re very real relationships, and with people with widely different backgrounds who probably disagree on a lot of things － and I know we disagree on some things for sure － but the speed with which that developed, because I think a lot of times we think it’s hopeless to develop relationships with people that are different from us, that it’s really hard and takes a lot of time, but we did it in three weeks. I realize it’s kind of constructed, it’s not necessarily the real world, but it is still real.

Talk about an experience during the class that sticks with you.

Alexa: One of the inside classmates, his name was José, he always had something super profound to say. He read us a poem by Tupac Shakur, “The Rose That Grew From Concrete.” Just hearing his story and how he feels like he’s that rose and he’s still going to be able to conquer everything, even though he has a lot going against him, was so powerful to me.

Zach: Yeah, he also said, I think on one of the first days, that he felt like he wasn’t an inmate for a while. That was pretty impressive. And I think the other thing that stuck out for me is the artistic and creative abilities (of inside students). We saw so many cool things, so many cool poems written by a host of students, and the artwork they did was incredible. They were good at drawing, they were good at making physical objects like flowers out of paper and using candy to color the paper. That left an impact.

Keshia: Yeah, there were a lot of different moments. I think the most memorable definitely was the reception that we had on the last day, and getting our certificates, just because a lot of people were able to show their talents － (inside students) Josh giving his speech and Mike writing a poem, and José telling his story, it was just really powerful to be in that room with them.

What can people do?

Zach: Look for ways to get involved. There are lots of really cool programs, specifically in Elkhart, there’s a lot of people working with people in the the criminal justice system, in ways that go beyond just punishment. Cory (Martin), he’s the chaplain, he does a lot of things. Connie (Caiceros) from the Center for Community Justice, she runs a lot of different programs. There’s a reentry initiative, run by Vic Stoltzfus and the Sheriff (Brad Rogers). It’s going to have an impact on your life, because it’s something that’s so visible.

Keshia: I would say one of the biggest things that we were saying the community should do is take a tour of the jail, because I think a lot of us get so wrapped up in thinking ‘they did a crime, they’re criminals, they deserve to be there.’ But just the construction of it, not having windows, not having outside time, sunlight, things we take for granted so easily. So just to go and see exactly their living situation and how they have to live day to day.

Alexa: One of our classmates told us that he hasn’t been outside since like 2014. That’s crazy. And then also, when you’re in that jail, though they view it as temporary, a lot of people are in there for a while. They were telling us that this is the first time they’ve seen another person from the outside, like someone who doesn’t work there. Sure, you’re not supposed to have fun in jail, but do we really need to dehumanize them to the point where they don’t see other people and they can’t even see their family in person? I think there’s a pretty fine line and I think we’re crossing it.

*Some portions of this interview were edited for clarity and length.