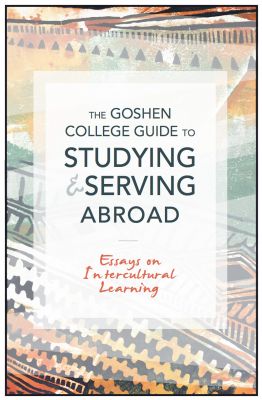 Just ahead of the 50th anniversary of Goshen College’s pioneering program in international education, the Study-Service Term (SST), Pinchpenny Press is publishing an intercultural guidebook, drawing on the experiences of faculty, staff and students who have participated in SST.

A release party for the book, “The Goshen College Guide to Studying and Serving Abroad: Essays on Intercultural Learning,” took place on Wednesday, April 12, in the Goshen College Church-Chapel’s Koinonia Room.

The 18 essays, edited by Professor of Communication Duane Stoltzfus, address subjects like learning languages, serving as a form of accompaniment, tracking time, framing stories, giving and receiving resources and money, dealing with death and becoming better specialists through study abroad.

Goshen College will celebrate the 50th anniversary of SST in 2018-2019. The program began in the fall of 1968, when students departed for three months in Costa Rica, Guadeloupe and Jamaica.

In the opening essay, Tom Meyers, the director of international education, notes that nearly 8,000 students have participated in the program, going to 24 countries in Africa, Asia, Europe and Latin America.

“With the anniversary approaching, it’s a good time to distill and share something of what has been learned over these years as a resource for students and others who are continuing the tradition and entering into their own conversations abroad,” Stoltzfus said.

Pinchpenny Press, which is sponsored by the English department, publishes chapbooks for students, faculty and friends of Goshen College. “The Goshen College Guide to Studying and Serving Abroad” is the 17th volume in the Horswell Anthology series.

The book costs $7 and can be purchased online or at the Goshen College Bookstore.