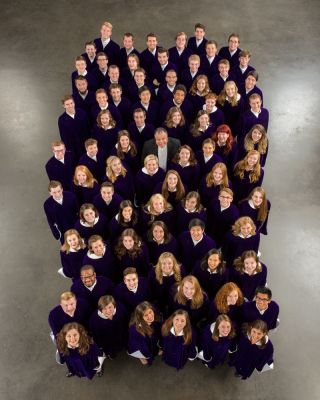 The St. Olaf Choir will come to Goshen College for a concert in the Music Center’s Sauder Concert Hall on Wednesday, Feb. 8 at 7:30 p.m. as part of their 2017 winter tour.

Tickets are $30 for adults and $10 for students, and can be purchased through the Goshen College Welcome Center (574-535-7566, welcomecenter@goshen.edu) or online at www.goshen.edu/tickets.

The widely acclaimed a cappella ensemble has toured annually since 1912, when it was founded by F. Melius Christiansen. The 1920 tour to the major music centers of the East Coast sowed the seeds of the ensemble’s national reputation and established its unaccompanied style of singing as a significant force in American choral music.

Anton Armstrong has served as conductor of the St. Olaf Choir since 1990. A 1978 bachelor of music graduate of St. Olaf College (where he was a member of the choir he now leads), Armstrong later earned a master of music degree in choral music from the University of Illinois and a doctor of musical arts degree in choral conducting from Michigan State University. He returned to St. Olaf after 10 years on the faculty at Calvin College in Grand Rapids, Michigan.

Under the adept direction of Olaf C. Christiansen ’25 (who succeeded his father in 1941), Kenneth Jennings ’50 (who led the ensemble from 1968 to 1990), and Armstrong ’78, the St. Olaf Choir has inspired and entertained audiences around the world. The St. Olaf Choir has performed under such notable conductors as Sir Neville Mariner, Osmo Vänskä, Neemi Järvi, Sir David Willcocks, Stanislaw Skrowaczewski, Helmuth Rilling, and the late Robert Shaw, and it continues to make frequent appearances with the Minnesota Orchestra and the Saint Paul Chamber Orchestra.

A television broadcast of the St. Olaf Choir’s 2013 performance in the 950-year-old Nidaros Cathedral in Trondheim, Norway, won two regional Emmy® awards. Produced by Twin Cities Public Television, PBS aired the one-hour television special, Christmas in Norway with the St. Olaf Choir, as part of their 2013 holiday programming. The program was also included in the 2014 holiday schedule.