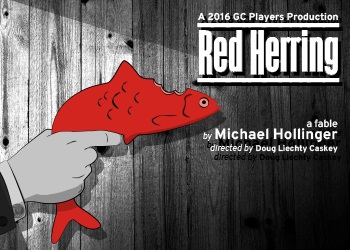 Fall Mainstage: “Red Herring”
Dates and times: Nov. 11, 12, 19 at 8 p.m. and Nov. 13, 20 (ASL interpreted) at 3 p.m.
Location: Goshen College Umble Center
Runtime: Two hours, with intermission
Cost: $10 general, $5 students/seniors/GC employees. Tickets can be purchased in advance through the Welcome Center by contacting (574) 535-7566, welcomecenter@goshen.edu or online at www.goshen.edu/tickets. Tickets can also be purchased at the Umble Center box office one hour before the show.

Three love stories, a murder mystery and a nuclear espionage plot converge in this noir comedy about marriage and other explosive devices. It’s 1952: America’s on the verge of the H-bomb, Dwight Eisenhower’s on the campaign trail and I Love Lucy is on Monday nights. Meanwhile, Senator Joe McCarthy’s daughter just got engaged to a Soviet spy and Boston detective Maggie Pelletier has to find out who dumped the dead guy in the Harbor or else lose out on a honeymoon in Havana. A blunt nosed, sharp-eyed look at love and tying (and untying, and retying) the knot. In the end, love and laughter abound.

“In these heavy global and national times during the election season, it seemed fitting that this time we counter all that with just pure, light-hearted fun,” said Doug Liechty Caskey, professor of theater, producer and director. “We find ourselves laughing every night during rehearsals, because the comedy is that tried and true. But I have no doubt that audiences will thoroughly enjoy a laughter-filled performance.”

The Philadelphia Enquirer describes “Red Herring” as “exceedingly funny. A genuinely human comedy about six people in search of love in a mixed-up world. A thoroughly engaging piece of theatre.”

Umble Center is accessible to wheelchairs and people with other physical limitations. American Sign Language interpretation will be offered during the Sunday, Nov. 20 performance of the play.