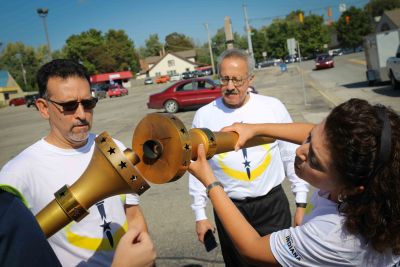 Torchbearers were chosen from more than 100 nominations around the county.

Patterned after the Olympic Torch Relay, Indiana’s version is passing through all 92 of the state’s counties, covering 3,200 miles over a five week period, averaging 97 miles per day over the course of five weeks.

The Torch Relay began in Corydon, Indiana’s first state capital, on Sept. 9, and will conclude on the Statehouse Grounds in Indianapolis on Oct. 15.