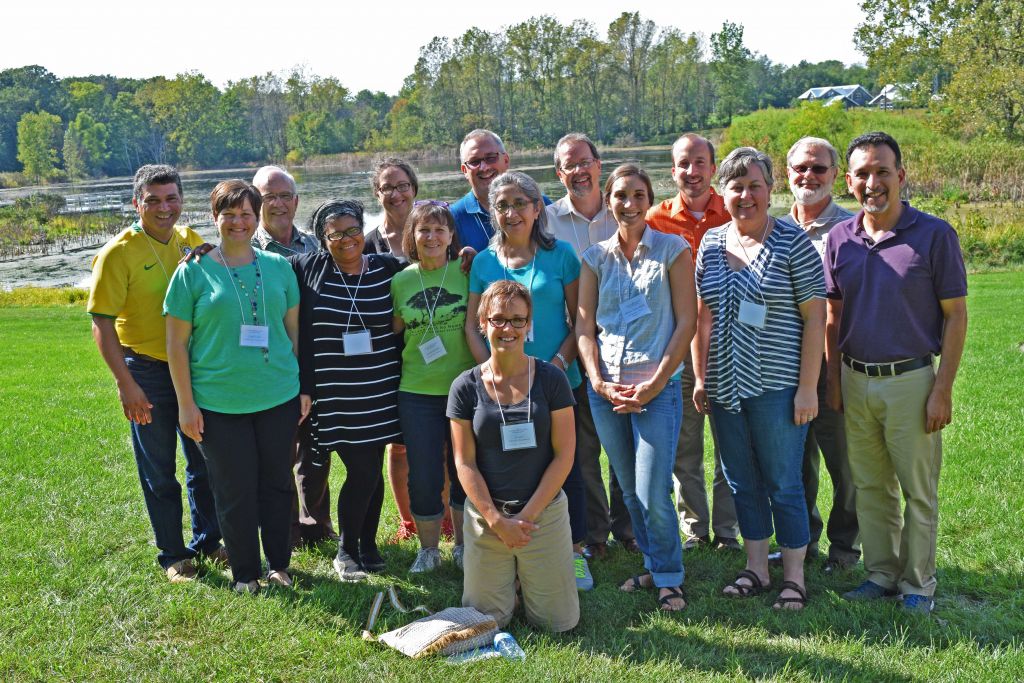 “How do we manage to see the beauty in diversity when it can be so messy?” wondered Jessica Schrock-Ringenberg. pastor at Zion Mennonite Church, Archbold, Ohio.

“My role is pastoral care,” observed Jan Rheimheimer, pastor at Lombard Mennonite Church, Lombard, Ill. “My job is to bring hope and healing to those already hurting. How do you discuss disruptive issues in the midst of pain? ”

Nunes, Schrock-Ringenberg and Rheinheimer were three of the eleven pastors who took a day away from the next sermon and the next hospital visit in order to attend Goshen College’s Pastors’ Academy, Sept. 21, 2016. The daylong retreat was a chance for Mennonite pastors to reflect on their ministries in light of three broad themes: ecological regeneration, intercultural leadership and the global nature of contemporary Anabaptism.

Goshen College identified these themes in 2011 as areas of potential strength that were worthy of further development. This led to the founding of the Institute for Ecological Regeneration, the Institute for Intercultural Leadership and the Institute for the Study of Global Anabaptism — each devoted to research, analysis and the sharing of findings.

Goshen College President Jim Brenneman and representatives from each of the institutes hosted the pastors at Merry Lea Environmental Learning Center of Goshen College, an 1,189-acre nature preserve. The setting allowed for lunchtime hikes and reflective periods outdoors.

Jonathon Schramm, an associate professor in the Sustainability and Environmental Education Department, introduced the Institute for Ecological Regeneration, which he directs. He emphasized that creation is more than just a series of things; it is made up of living beings and they too are recipients of God’s grace and reconciliation.

Gilberto Perez, senior director of intercultural development and educational partnerships, described the work of the Institute for Intercultural Leadership. This institute provides support for minority youth and assists pastors and others working at intercultural dialog. Perez described an incident he witnessed involving youth at a football game who were chanting, “Build a wall, keep them out, speak English!” in response to the Latinos around them.

“We as Mennonites have so much to offer a conflict like this,” he said.

The Pastor’s Academy was a significant milestone for the institutes. “This was the first time we worked at the ways the three institutes intersect and the meaning they may have for congregational life,” observed Luke Gascho, Merry Lea’s executive director who moderated the event.

The Pastor’s Academy pushed pastors to engage with the themes the institutes work on and relate them to their own ministries. The group also identified areas where the themes intersect, such as climate change.

“Just within the Mennonite World Conference, there are many stories of how people are suffering,” Gascho pointed out.

Pastors chose to participate in the academy for a variety of reasons. One cited the fact that Goshen College is controversial in his congregation. Therefore, he wanted to connect with the school and understand it better. Another was seeking to balance his love for God’s creation with other parts of his ministry. Others were curious and felt honored to be invited.

When asked to evaluate the day, pastors expressed appreciation for the way the conversation was anchored in scripture. “All speakers had a comfort level with the language of faith and a grasp of why scriptures and theology matter,” one said. Multiple comments reflected an appreciation for the themes covered, the way the themes were integrated and their relevance to ministry.

The Pastor’s Academy was supported by a grant from Mennonite Education Agency’s Fund for Peoplehood Education. A similar event will take place in May 2017.