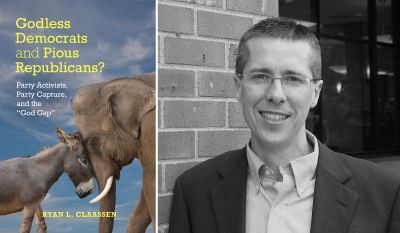 On Sunday, Sept. 11 at 7 p.m., Claassen will deliver a New Perspectives on Faith presentation in the Goshen College Church-Chapel. Both events are free and open to the public, and will be followed by a short question and answer session with the audience.

Claassen is a 1994 Goshen College graduate and earned a Ph.D. in political science from the University of California, Davis in 2005.

In his book “Godless Democrats and Pious Republicans” (Cambridge University Press), Claassen carefully assesses the way campaign activists represent religious and non-religious groups in American political parties dating back to the 1960s. By providing a new theoretical framework for investigating the connections between macro social and political trends, the results challenge a conventional wisdom in which recently mobilized religious and Secular extremists captured the parties and created a God gap.

The new approach reveals that very basic social and demographic trends matter far more than previously recognized and that mobilization matters far less. The God gap in voting is real, but it was not created by Christian Right mobilization efforts and a Secular backlash. Where others see culture wars and captured parties, Claassen finds many religious divisions in American politics are artifacts of basic social changes. This very basic insight leads to many profoundly different conclusions about the motivations of religious and non-religious activists and voters.

Claassen will also speak to religion and history classes at Goshen College during his visit.