The 10 retiring employees who said goodbye to Goshen College this year spent a considerable amount of time on campus (173 years, in fact, as employees). A few of the retirees have highlighted memories from GC — whether as a student or employee — that made their time here unforgettable.

“I remember planting trees to honor the inauguration of President J. Lawrence Burkholder in 1971. The two London planetrees I helped plant are now large, stately trees beautifying the campus.”

“I will treasure forever seeing the faces of our women’s basketball players, coaches and fans after each win at nationals. Goshen College, while steeped in traditions, is progressively moving forward, creating new ones.”

“Study-Service Term influenced me quite significantly — our group’s trip to Volcan Arenal [in Costa Rica] has to be at the top of the list. Never would I have anticipated riding in a jeep through a river (wondering whether we’d float away) and through a village covered in ash from an eruption that had occurred barely six months earlier. Then we climbed up to the edge, feeling the heat through our shoes, and looked into the glowing pit of the crater! Nothing can compare.”

“One favorite memory would be the receipt of the check (yes, an actual check) of $12.5 million that established the Center for Intercultural Teaching and Learning grant from the Lilly Foundation about nine years ago. Those funds created the entire CITL (now Center for Intercultural and International Education) function and all those efforts at the college, and in a major way funded our directional path of increasing our outreach and support of Hispanic students. I remember getting the check in the mail, and in the Executive Offices we all watched solemnly as I opened the envelope, took out the check and dropped it from shoulder height. As it fluttered to the floor we watched breathlessly to be sure it didn’t bounce!”

Vicky Kirkton ’73, associate professor of nursing and director of RN to BSN program

“The 50th anniversary of the nursing department was held in October of 2003 on Homecoming Weekend with over 100 in attendance and honoring the class of 1953, the first graduates of GC’s nursing program. There were three GC graduates who shared from their research and nursing experiences. Students gave a style show of old nursing uniforms and a panel of alumni from different eras shared nursing trends and the day ended with an open mic for informal sharing. The whole event reconnected the activities in the department and, of course, Goshen College.”

“One of my favorite memories while working at Goshen College has to do with the formulation of the core values in 2003. I was working in Information Technology Services as a computer support staff member at the time and was surprised to be invited to participate in the process, which took place at the Merry Lea Environmental Center of Goshen College. A diverse group of faculty, staff and students worked for many hours to define and articulate the core values of Goshen College. It was a fulfilling experience for me personally, as many ideas were offered, edited, discussed and rejected, and the final five were ultimately agreed upon. I think the values the group proposed then still resonate and continue to provide an identity and direction for the college we can all be proud of.” 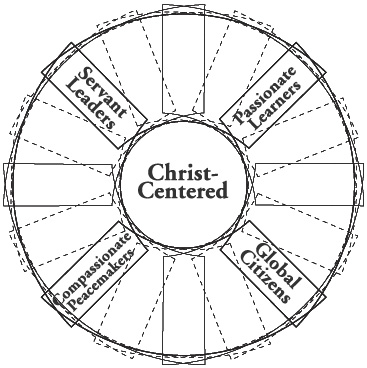