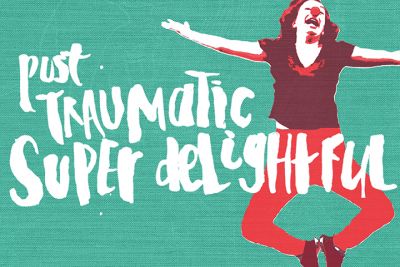 Brooklyn-based playwright and solo performer, Antonia Lassar, will present Post Traumatic Super Delightful this Friday, April 29th at 8 p.m. in Goshen College’s Umble Center. The hour-long performance will be followed by a talkback session with Lassar.

Post Traumatic Super Delightful is a half-docudrama/half clown — all feminist — one-woman show about the sexual assault crisis on college campuses. PTSD weaves together the lives of survivors, perpetrators and bystanders in a wickedly funny and piercingly insightful story about a community trying to heal after sexual assault. Because of difficult material, PTSD is not recommended for audiences under 13-years-old.

GC Players, Goshen College’s theater club, will host the performance with significant financial contributions from a variety of clubs and departments on campus. Following the success of last year’s guest performance, The Women of Ciudad Juarez, GC Players wanted to provide another opportunity for Goshen College and the wider community to discuss and process difficult topics like sexual assault.

“This performance is important because it asks us to consider our own preconceived notions of sexual assault,” said Christina Hofer, a GC senior, who suggested the performance after seeing it at the Minnesota Fringe Festival this past summer. “In one hour, audiences will laugh, cry and hopefully realize their role within this larger societal issue.”

After being developed in All For One Theater’s SoloLab and Works In Progress Series to an overwhelming audience response, Post Traumatic Super Delightful made its world premier to sold‐out houses at the FRIGID New York Festival, winning “Best Political Play.” Since then, the play and creative team have received national attention, being featured by Marie Claire Magazine and Autostraddle and working with Glamour Magazine to mentor winners of their Top Ten College Women Competition. The play is currently touring theaters, colleges and crisis centers across North America.

Tickets cost $5 for general admission and can be purchased in advance through the Welcome Center at (574) 535-7566, welcomecenter@goshen.edu or online. Tickets can also be purchased at the Umble Center box office one hour before the show.