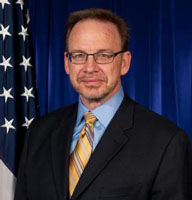 The Reverend David Myers, director of the Department of Homeland Security’s Center for Faith-based and Neighborhood Partnerships, will present the 2016 Yoder Public Affairs lecture at Goshen College, titled “Blowing Down Fences, Making Good Neighbors: Interfaith and Intercultural Collaboration in Disasters” on Thursday, March 17 at 7:30 p.m. in the Goshen College Church-Chapel.

Disasters and emergencies create chaos and immediate community. Examples abound of cross-cultural and interreligious cooperation during the response phase of a disaster. However, as the recovery phase unfolds, pre-disaster barriers can re-emerge and even increase. Myers, who has deployed to more than 30 presidentially-declared disasters, will tell stories of community-building and offer personal reflections on why sometimes the new-found cooperation has not lasted.

On Friday, March 18 at 10 a.m., Myers will deliver a speech titled “An Unpredictable Pathway to Presidential Appointee” during a convocation in the Goshen College Church-Chapel. Both events are free and open to the public, and will be followed by a short question and answer session with the audience.

Appointed by President Obama in 2009, Myers heads one of 13 such centers in the federal government under the White House Office of Faith-based and Neighborhood Partnerships. Myers and his staff work to build, sustain and improve effective partnerships between the Department of Homeland Security and faith-based and voluntary organizations. In this role, Myers has personally led Center efforts at major disasters, working closely with senior governmental, state, local, faith-based and voluntary groups.

Prior to joining DHS, Myers served faith-based and neighborhood organizations as an executive director and minister for twenty-five years, primarily in Chicago. These included Teen Living Programs, Center for Public Ministry, and three Mennonite congregations. Myers is a father of two adult children, and a grandfather of one grandchild.