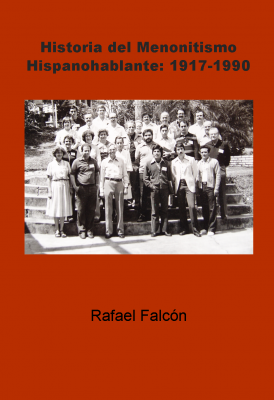 In mid-August of 1917, during the First World War, Mennonite missionaries T.K. Hershey and J.W. Shank sailed from New York, along with their young families, on a British ship to Argentina.

At war with Great Britain, Germany had just begun a global strategy of targeting and sinking boats aligned with its enemies. So it was twenty-seven days later, after a long journey through waters infested with submarines and floating mines, the first Mennonite missionaries to the Spanish-language world disembarked in Buenos Aires on September 11, 1917.

This story, and others like it, is chronicled in a new book detailing the experience of Spanish-speaking Mennnonites in the 20th Century called “Historia del Menonitismo Hispanohablante: 1917-1990,” (CreateSpace Independent Publishing Platform, Sept. 2015, $19.95 online), by Rafael Falcón, professor emeritus of Spanish at Goshen College.

Mennonites, Falcón notes, who had already been in Europe and North America for centuries, did not move into the Spanish-speaking world until the beginning of the twentieth century. Some Mennonites came in search of religious freedom and created German-speaking colonies in Central and South America. Others entered as missionaries. It was their presence that spurred the development and growth of Mennonite churches and institutions throughout Latin America, as well as the Spanish-speaking communities of Europe and North America.

The 403-page book is divided into ten chapters that trace the story from the early Anabaptist movement in Europe, through the immigration of Mennonites into North America, into exploration and establishment of the first Spanish-language Mennonite church in Argentina in 1919, and through 1990 when a Mennonite presence was a reality in all of Latin America and in Spanish-speaking communities in North America and Europe.

The book includes two appendixes. The first outlines the significant moments of Spanish-speaking Mennonite history, while the second highlights some of the pioneers of this significant story. The extensive bibliography offers a wealth of possibilities for those interested in further research into the theme.

Falcón experienced firsthand the impact of the Mennonite missionary effort on his island home of Puerto Rico. This initial boyhood contact ignited his interest in the historical fusion of Anabaptism and Hispanic culture, an interest that has given birth to many published articles and books on a variety of themes, including Puerto Rican immigration to the United States, Afro-Hispanic influence in literature, Hispanic culture and Hispanic Mennonite history.

In 1985, Herald Press published his “La Iglesia Menonita Hispana en Norte América: 1932-1982,” as well as its translated version. His book “Salsa: A Taste of Hispanic Culture” came out in 1998, and in 2008 he published a collection of short stories, “Mi Gente: In Search of the Hispanic Soul.” In 2014 he wrote “Mennonite Memories of Puerto Rico.”

“Historia del Menonitismo Hispanohablante: 1917-1990” is currently available and sold only through Amazon.com. All profits from the sales are given to the Academia Menonita Betania, a Mennonite school in the center of the Island founded by missionaries in the late 1940’s.