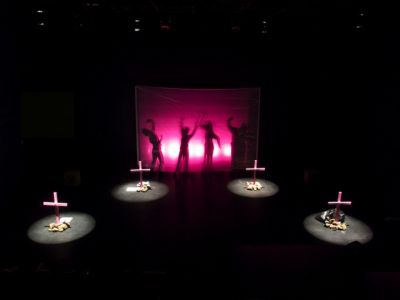 Play: “Women of Ciudad Juárez” by Cristina Michaus
Date and time: April 22, 2015 at 8 p.m.
Location: Goshen College Umble Center
Cost: $5 general admission. Tickets can be purchased in advance through the Welcome Center by contacting (574) 535-7566, welcomecenter@goshen.edu or online at www.goshen.edu/tickets. Tickets can also be purchased at the Umble Center box office one hour before the show.
This play contains disturbing themes and may not be suitable for audiences under 18 years old.

The College of Wooster Department of Theater and Teatro Travieso will present “Women of Ciudad Juárez” on April 22 at 8 p.m. in Goshen College’s Umble Center. The hour-long performance will be followed by a talkback session with the director and actors.

The play is a powerful tribute to the hundreds of women who were raped, tortured and murdered during two decades of terror in the Mexican industrial border city that lies south of El Paso, Texas. Because of disturbing themes, this play may not be suitable for audiences younger than 18 years old.

After seeing “Women of Ciudad Juárez” at the Kennedy Center American College Theater Festival, the GC Players theater club teamed up with the Goshen College Theater Department and Center for Intercultural and International Education, with additional support from the Student Senate and several other student clubs, to help make this one-time performance a reality.

“The investment and energy of the GC students to widen the circle of awareness on the Goshen campus and in the Elkhart County community has been the driving force toward making this event happen,” said Doug Caskey, professor of theater. “It’s an ideal example of the power of theater for social change.”

Written by Cristina Michaus, a famous Mexican film actress, documentary filmmaker and playwright, the production was translated into English and directed by Jimmy A. Noriega, assistant professor of theatre and dance at Wooster. The cast includes The College of Wooster students Marisa Adame, Stephanie Castrejon, Janna Haywood and Summit J. Starr. 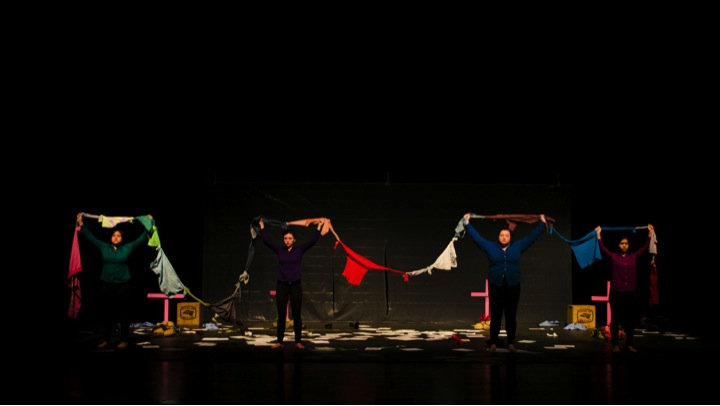 “Showing multiple female perspectives of life in Juárez – from mothers and daughters, to factory workers and prostitutes – the play speaks out against all forms of violence against the female body and psyche,” Noriega said.

Jimmy A. Noriega is assistant professor of theatre in the department of theatre and dance at The College of Wooster. He holds a Ph.D. in theatre studies from Cornell University. He is currently completing a manuscript that focuses on community-based and activist performance across the Americas. His research is situated in the Bolivian, Peruvian and Ecuadorian Andes; the Maya regions of Mexico and Guatemala; and the U.S.–Mexico border.

Teatro Travieso/Troublemaker Theatre was founded in 2012 under the direction of Jimmy Noriega with students from The College of Wooster. Through performances in English and Spanish, it aims to expose and disrupt power structures that exploit and oppress individuals across the Americas. At its core, the company seeks to cause the best kind of trouble – the type that creates witnesses and fights for those who seek justice and equality in their communities. The company’s first production, “Encuentro: Peru!!,” was based on a five-week research trip to Peru and is about being a stranger in a foreign land. “Women of Ciudad Juárez” is the group’s second production. It will continue to tour.

Umble Center is accessible to wheelchairs and people with other physical limitations.

Tickets cost $5 for general admission and can be purchased in advance through the Welcome Center by calling (574) 535-7566, emailing welcomecenter@goshen.edu or online at www.goshen.edu/tickets. Tickets can also be purchased at the Umble Center box office one hour before the show.